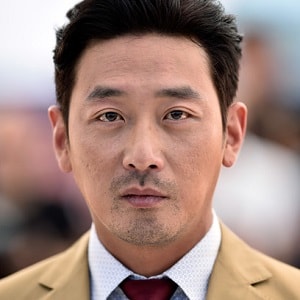 “There is a streetlight in front of Soo Yeon's house. From there to home, it takes 280 steps. If we have been walking away from each other for 14 years, how many steps will it take to get back? If she doesn't come even if I wait, that doesn't mean that she abandoned me.. it means she is on her way.”

Ha Jung-woo is currently single and he is focusing on his career rather than being in a relationship. Previously, he dated fashion model/actress Goo Jae-yi from August 2008 to January 2012.

Who is Ha Jung-woo?

Ha Jung-woo is a South Korean actor, screenwriter, film director, and film producer. He is one of the highest grossing actors in South Korea, and his starring films have accumulated more than 100 million tickets. He is best known for his role in ‘The Chaser’ in 2008, ‘My Dear Enemy’ in 2008, ‘Take Off’ in 2009, ‘The Yellow Sea’ in 2010, and many more.

He was born on March 11, 1978, in Seoul, South Korea. His birth name is Kim Sung-woo and he is currently 40 years old. He came from an acting family. His father’s name is Kim Yong-gun and he is a well-known veteran actor and has made his appearance in many movies and television series.

His younger brother’s name is Kim Young-hoon and he is also an aspiring actor. He always dreamed of becoming an actor like his father since the age of 5.

He joined a private acting institute and got actor Lee Beom-soo as his instructor. Later, he enrolled at Chung-ang University and majored in theatre.

He started his military service in 1998 and began working in the Armed Forces Public Relations Department. He appeared in 10 promotional films for the military at that time.

He debuted acting in 2002 in the 2002 SBS sitcom ‘Honest Living’ and his feature film debut in the 2003 film ‘Madeleine’. He made his first starring role in the indie film ‘The Unforgiven’ and became more famous after his performance in ‘Time’ and ‘Breath’.

He played the role of serial killer Yoo Young-chul in the 2008 film ‘The Chaser’ and the movie became successful to sell over 5 million tickets. In the same year, he played in ‘My Dear Enemy’, ‘The Moonlight of Seoul’, ‘Boat’, ‘Take Off’, etc.

His some remarkable films between 2009-2013 include ‘Nameless Gangster: Rules of the Time’, ‘Love Fiction’, ‘The Berlin File’, ‘The Terror Live’, where he made his collaborations with directors like Ryoo Seung-wans, Yoon Jong-bin, and so on.

He directed the movie ‘Rollercoaster’ and the film was a box office success. He portrayed the role of Joseon era in the film ‘Kundo: Age of the Rampant’. He wrote, directed and starred in ‘Chronicle of a Blood Merchant’ in 2015 and made his appearance in one of the biggest domestic hits of the year, ‘Assassination’.

He is also one of the fine artists. His paintings which were a hybrid of Pop art and Expressionist styles were displayed in several solo art exhibitions. He also came up with his compilation of essays named ‘Ha Jung-woo, Good Feeling’ in 2011.

He was awarded the Best New Actor at the 25th Korean Association of Film Critics Awards in 2005, Producer’s Choice Award at the 16th Puchon International Award in 2011, Most Promising Talent at the 9th Osaka Asian Film Festival, 3rd Asia Artist Awards for Artist of the year, Best Artist and Fabolous Award in 2018, and many more.

He has not disclosed his salary and income so it is hard to predict his net worth. However, it is under review.

He was rumored for asking SunMi’s phone number through actor Ju JiHoon and he responded by saying he does not feel bad.