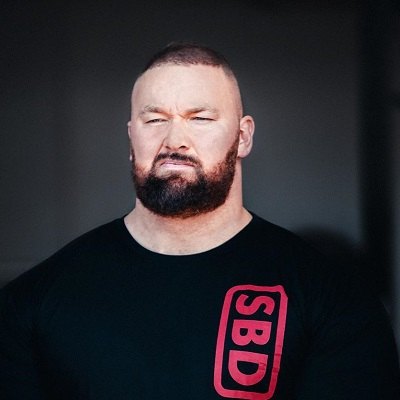 Hafthor Bjornsson is married to Kelsey Henson. His wife Kelsey is a waitress by profession.

The couple first met at a bar in Alberta, Canada. At the time, Hafthor was there for a strongman competition. Later, they started dating each other in 2017.

Finally, on the 21st of October 2018, they announced that they are married to each other.

Prior to that, in early 2017, he was in a relationship with Andrea Sif Jónsdóttir. They met at the gym.

Before that, the actor was dating Thelma Björk Steimann. Together they have a daughter, Theresa Líf.

The couple welcomed their son on 26th September 2020. The baby’s weight was 7.78lbs at the time of his birth. However, the name of a newly born is not yet revealed.

Who is Hafthor Bjornsson?

Icelandic Hafthor Bjornsson is a World’s Strongest Man title-winning professional strongman and actor. Bjornsson is renowned as the mountain of Games of Thornes.

He is famous for his powerlifting as a strongman. Also, he is a former basketball player.

Hafthor Bjornsson was born Hafþór Júlíus Björnsson on the 26th of November 1988 in Reykjavík, Iceland. He is the son of Björn and Ragnheiður. They are of British-Ireland ancestry.

– In 2004, he started her basketball career at Division I club, Breiðablik as a center. One year later, he the basketball club, FSA Selfoss.

– After 10 games with the club, he discovered that he had been playing with a broken ankle and went through surgery. After the recovery, in 2006, he participated in the Úrvalsdeild Karla competition with the KR club.

– Playing 32 games in Icelandic junior national basketball teams and 8 games in the U18 European Championship, he left his career as a basketball player.

– In 2008, he found himself engaged in the Strongman career. At the time, he met Magnús Ver Magnússon in his gym.

– In 2010, he became the winner of the Strongest Man in Iceland. He continued the title in the next year too. The same year, he earned the wild card entry for the World’s Strongest Man. In the event, he secured the sixth position.

– Later, he further continued attending the event. Finally, in 2018, he won the title and became the first Icelandic to win the title.

– He also pursued his acting as his career. As an actor, he debuted in the through the Hit TV series, Game of Thrones. In the series, he portrayed the character of The Mountain. He continued the character till 2019.

– Apart from that, he also made his appearance in the movies like 2019- Hamlet Pharaon, 2017- Beast, and Kickboxer: Retaliation.

The winning amount with the title, World’s Strongest Man is in the range of $72k or above. Also, a brand ambassador of  SodaStream, he makes $22k – $66k.

Apart from that, he also earns through is his spirits brand, Icelandic Mountain Vodka. Besides that, through his YouTube channel, he makes $13.1k – $209.1k yearly.

He is a blue-eyed auburn. His height is 6 feet and 10 inches and weighs around 193 kg with a build body type.

Being tall is in the blood of the actor as his father stands at a height of 6 feet and 8 inches. Also, his grandfather’s height is around 6 feet and 10 inches, the same as Hafthor.

In 2017, the strongman faced a senior controversy. At the time, his ex-girlfriend accused that she had gone through senior domestic violence during their relationship. She also added that he would get jealous of her male friend. Out of the jealousy, he even deleted all the male friend’s contact numbers from her phone.

The violence got even worst when he went to the basketball Academy. He used to hit, smash, and gripped her neck. She further went adding that she even went through some sexual abuses when she was pregnant with her child.

However, he denied all the allegations and wrote in the Facebook that till the date, he has not lifted his hands against any women. Also, he added that all the allegation represents her hate towards him. Also, he mentioned that he has been abused in the relationship mentally and physically too.

On Twitter, he is following the personalities like Michelle Ackerley, Mike Titan o’ Hearn, and Jason Poston.