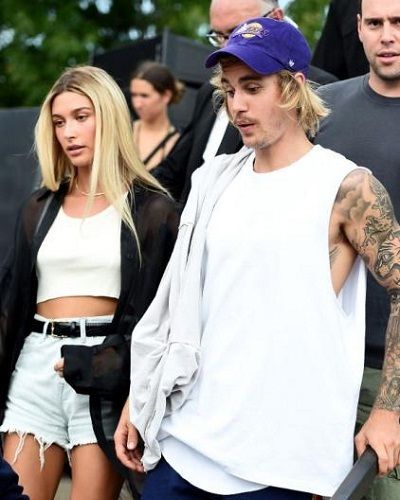 Hailey Bieber drops on Instagram that she is having baby fever looking at the pictures Kylie posted withy her 1-year-old daughter Stormi.

On Thursday, Kylie dropped a series of photo of her 1-year-old daughter Stormi and her father Travis enjoying their day on the playground as a family day out. Along with the pictures she also posted a video of her and Stormi playing swings. Kylie captioned the post:

“We took our baby on an adventure yesterday. Ugh, I love this little girl so much. not only do I think she’s the cutest thing in the world… she’s got the sweetest, smartest, most special little soul p.s. the pat on the back at the end of the video gets me every time”

The video really got Justin Bieber’s wife Hailey revved up for motherhood. Stormi gave Hailey so much cuteness overloaded that she couldn’t stop but type her famous friend,

“please stop giving me the most baby fever. she’s the sweetest.”

When Hailey commented on Kylie’s post, it got over 5,000 likes in just a few minutes. Mrs. Bieber got a lot of attention from the post.

Many fans couldn’t handle her baby fever and were losing their minds over it. Several comments are tagging Justin Bieber to make sure he’s aware that his wife seems to be ready to be pregnant. One of her fans replied,

However, seems like currently, the Biebers are not in a hurry to start their own family.

You may also read Justin Bieber confirms his wedding to Hailey Baldwin and says that he is a married man!

People thinking of their future baby

Mano of Justin and Hailey’s fans are commenting about how the baby will turn out and how cute it’s gonna be. As we know that the Bieber quietly wed in September 2018 with a private courthouse ceremony in New York.

Even though Mrs. Bieber has a big baby fever Justin mentioned that he has no rush in having kids saying,

“Love dates with you baby…one day I’ll be doing daddy daughter dates…. not hinting at anything soon I’m not in a rush. I just wanna enjoy you by yourself for a while!”

Hailey Rhode Bieber, born on November 22, 1996, is an American model and television personality. Her mother is a Brazilian of Italian and Portuguese descent. Baldwin’s first career aspiration was to become a professional classic ballet dancer but ended due to a foot injury. More bio.