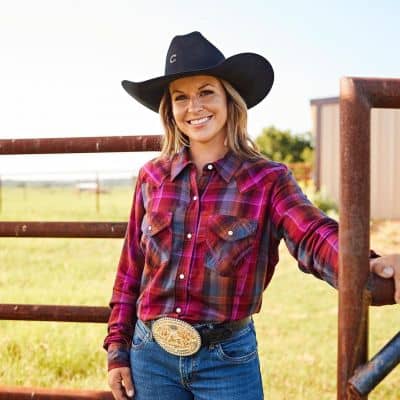 Talking about her relationship details, Hailey Kinsel is a married woman. She married her longtime boyfriend Jess Lockwood who is a Professional Bull Riders World Champion Bull Rider. The couple started dating in April 2018.

Moreover, Jess announced their engagement on 28 March 2019, and later on 25 October 2019, the love birds tied the knot at Kinsel’s parent’s ranch in Cotulla, Texas. The couple would split their time between winter at her ranch in Stephenville and spring at his in Montana.

Despite this, the couple does not have any children at the moment.

Who is Hailey Kinsel?

Hailey Kinsel is a well-recognized American Rodeo competitor, equestrian rider, and athlete. Kinsel is a three-time World Barrel Racing Champion winning the title in 2017, 2018, and 2020 at the National Finals Rodeo.

Moreover, her horse, Sister won the Barrel Racing Horse of the Year Award in 2018.

Hailey Kinsel was born on 3 October 1994. At present, she is 27 years young star. Likewise, her birthplace is Cotulla, Texas, the USA.

Hailey is the daughter of her father, Dan Kinsel whereas her mother is Leslie Kinsel. Moreover, she has a brother, Matt who helped her to compete in horses.

Talking about her nationality, Kinsel holds an American identity whereas her ethnicity is Caucasian.

Regarding education, the athlete completed her graduation from Texas A&M University with a BA in Agriculture Economics.

Professionally, Hailey started her career at an age of 13. She received her first dedicated barrel horse, who “couldn’t be used on the ranch”. Later, she also had TJ when she filled her professional permit for the Women’s Professional Rodeo Association(WPRA). Kinsel and her mom, Leslie purchased her present barrel racing horse DM Sissy Hayday “Sister” like a filly.

The equestrian won a gold medal at the Days of ’47 Rodeo in Salt Lake City, Utah, and won the West of the Pecos Rodeo in Texas. Kinsel however finished in second place at the Tri-State Fair and Rodeo in Amarillo, Texas, the Dinosaur Days Rodeo in Vernal, Utah.

Kinsel and her horse, Sister won the semi-finals and forwarded to the finals on Sunday, February 19, where the possible finals prize was $1 million. She won her event with a time of 14.4 seconds in the long round and moved in the top four for the short round.

A famed personality, Kinsel has earned a handsome amount of money from her profession. She lives a luxurious lifestyle along with her family.

However, the equestrian rider has not disclosed her exact salary, earnings, and assets details till now.

Hailey has never been part of any controversial matter or rumors till now. The star has been preoccupied with her professional and private life.

It seems that Kinsel prefers enjoying her personal life and does not want to merge it with her professional life.

27 years young star, Hailey has beautiful looks and an admirable personality. She has not stated her exact height but seems to be more than 5 feet tall.

Furthermore, Kinsel has brown eyes whereas her hair is blonde.

Regarding her social media presence, Hailey Kinsel is an active personality on social media. Hailey has more than 205kfollowers on her official Instagram account @haileykinsel.

Moreover, Kinsel is also available on Facebook with nearly 250k fans and supporters.