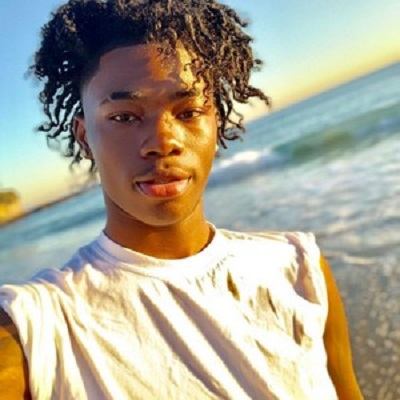 Hakeem Newkirk is in a relationship with Shayydee. His girlfriend is also a YouTuber by profession. Hakeem introduced her as his girlfriend through a YouTube video in March 2020.

Later, on 12th of June 2020, the couple shared a video where Shayydee was going through a pregnancy test. In the test, she came out to be positive.

Previously, through his YouTube video, he introduced his crush, Eisha.

Who is Hakeem Newkirk?

American Hakeem Newkirk is an Instagram Influencer. He is renowned for his Dubsmash videos along with lipsync and dance that went viral on the web.

Last, in 2020, he created a new YouTube channel, The Newkirk Family. As of now, he has not made any posts on the channel.

Hakeem Newkirk was born on the 16th of September 20o1 in the United States. He is of All-American ethnicity.

Till date, he has shared any details on his family background including his father, mother, and siblings. However, his family is based in Atlanta.

Details on his academics are not available. However, he might be attending university at the moment.

Moving forward, he started posting his Dubsmash videos on the app. Those videos caught the eyes of many people causing a huge boost in the platform.

Apart from Instagram, he is equally famous for his YouTube videos too. He started his channel on the 3rd of December 2017 and started posting on the 2nd of July 2019. The channel is based on his vlogs, challenge, and pranks video that he plays to his girlfriend.

Also, he is popular in TikTok. He started his journey of the platform through his video that he posted on the 4th of September 2019. Being a well-known face in other platforms, he received a great response to his very first video with 26.7k likes.

His journey in the platform became successful with millions of plays that he receives on the video. As of Septemeber 2020, he has 1.7m followers with 39m likes in the app.

As of 2020, he has an estimated net worth of $1.5 million. Being an Instagram influencer, his salary is in the range of 5 digits numbers. Besides that, he also makes through brand promotion through his posts.

Also, his YouTube channel has estimated earnings in the range of $512 to $8.2k. Apart from that, he also makes through his TikTok videos.

Hakeem Newkirk has black eyes with black hair. He stands at a height of 5 feet 8 inches and weighs around 75 kg with ectomorph body type.

Till date, he has not been involved in any sort of controversy and scandal that created a buzz in the media. Besides that, he has managed a distance from any sort of rumors too.

Hakeem has three Instagram accounts; hakeemnewkirk with 949k followers, hakeem.706 with 260k, and yourfav0ritetrinidad with 269k.

He also has a self-titled YouTube channel with 374k subscribers with more than 18 million views.

You may also read the bio of Rachel Bush, Kim Caramele, and Ross Bagley.