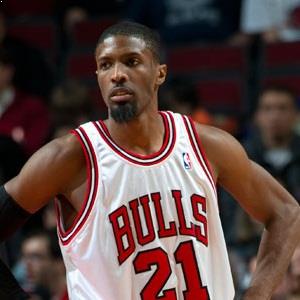 Reflecting on a personal life of Hakim Warrick, he is possibly single. There isn’t any information regarding his romantic relationship affairs. His personal life isn’t in the limelight as his career path is.

He has kept his personal life far from the tabloids. There isn’t any solid proof which leads towards his married lifestyle and children. Being a celebrity, his personal stuff is always a matter of discussion and interest to the public.

Who is Hakim Warrick?

Tall and handsome Hakim Warrick is a well-known American professional basketball player. He is best known as the player for Leones de Ponce of Baloncesto Superior Nacional. He plays from Power forward and center position wearing a jersey number 1.

Hakim Warrick was born in Philadelphia, Pennsylvania. He was born on 8 July 1982. He is of African American ethnicity and has American nationality.

His birth name is Hakim Hanif Warrick. He is the son of Kenneth Nichols(father) and Queen Warrick(mother). He has a sister Ciara and two brothers, Bill and Tyrell.

Warrick studied at Friends Central School in Wynnewood, Pennsylvania and later graduated from Syracuse with a degree in retail management and consumer studies. He also played college basketball where he led his team to its first National Championship.

Hakim Warrick started playing basketball professionally after being selected by the Memphis Grizzlies in the 2005 NBA draft. As a rookie, he appeared in 68 games recording an average of 4.1 points and 2.1 assists per game in 10.6 minutes.

In December 2013, Warrick signed with the Liaoning Flying Leopards of Chinese Basketball Association (CBA). On 5 January 2015, he signed with TorkuKonyaspor of the Turkish Basketball League but soon left the team to sign with Melbourne United on 22 September 2015. On 17 February 2016, he was named the NBL Best Sixth Man for the 2015-16 season in Australia.

On 24 February 2016, he signed with Olympiacos of the Greek Basket League for rest of the season. In 2017, he signed with Leones de Ponce of Baloncesto Superior Nacional and since then he is playing for them.

Hakim Warrick: Salary and Net Worth

Hakim has a height of 6 feet 9 inches and weighs 99 kg. His eye color is black and hair color is black. His shoe size is unknown.