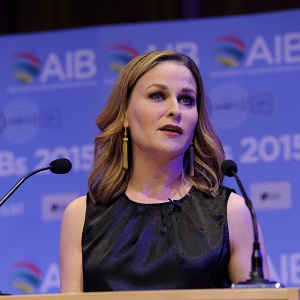 Hala is a married woman as of now. She is in a marital relationship since 2015. Her husband’s name is Christian Streib. The beautiful couple tied the marital knot on June 14, 2015. The marriage ceremony took place in Jardin Majorelle in Morocco. The couple as of now lives together sharing love and affection. The love between them has been growing with the passing of time. And there is no any news on their separation or divorce till now.
Currently, they live together sharing an incredible bond with no sign of conflict between them.

Who is Hala Gorani?

Washington-born Hala Gorani was born on March 1, 1970. Hala is an American national. Talented Hala is a professional news anchor. Also, she is active in the field of news corresponding. Additionally, she is also popular for receiving “Honorary Doctor of Humane Letters” degree from George Mason University in 2015.

Presently, she is a prominent figure among the public for anchoring the show, “The World Right Now with Hala Gorani” on CNN. She is an international news anchor and news correspondent for CNN bureau based in London.

As per her education, she joined George Mason University in Fairfax, Virginia, near Washington, D.C. From there she graduated with a degree in Bachelor of Science in economics.  Afterward, she enrolled at Institut d’études politiques (also known as Sciences Po) in Paris. Later she graduated from there in 1995.

Hala initiated her career as a news reporter. She joined the newspaper, “La Voix du Nord” in France. Afterward, she continued the same job in another news agency, “Agence France-Presse”. Then in 1994, she moved to work with “France 3”. Later she started working for Bloomberg Television in London.

Her work at the Bloomberg ended in a short time. Finally, in 1998, she joined CNN. Since then, she has been working for CNN as the news anchor. During the initial days in CNN, she anchored the show, “European breakfast show”, and “CNN Today”.

As for her career at CNN, she reported on various news based in Middle East nations. Some of them are “2006 Lebanon-Israel war”, “Al Qaeda suicide bombing attack in Jordan”, and others. Additionally, she also covered events like “2015 November ISIS Attack in Paris”, and “2010 Haiti Earthquake”. For her effortful work, she received several awards including EMMY Award, TV Personality Awards and so on.

A person in her job position for sure earns a good amount of salary. And therefore, she has been able to collect a large amount of net worth. According to the estimation, it is somewhere around $2 million.

Hala has been part of some controversy in the media. Previously, in 2016, Kate Hopkins accused CNN as the Clinton Biased Network during an interview with Hala. Soon, the interview heated up and brought her to the headlines creating some criticism. Presently, there are no other controversies or rumors that surround her personal or professional life.

Hala has an incredible body figure. Her height is 5 foot 6 inches and weight 56 kg. Similarly, she has an attractive figure of 32-25-33 inches. She has a blue eye color and lights brown hair color.