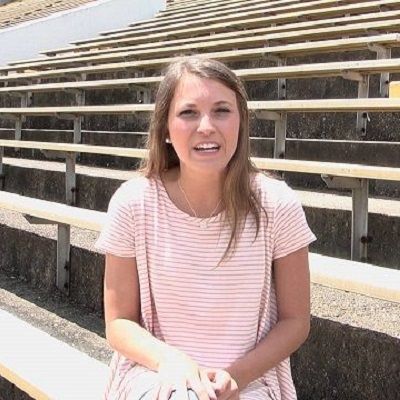 Haleigh Hughes is a married woman. She is married to the American football quarterback Nick Mullens. They first met each other when they were in college as both attended the University of Southern Mississippi. Since then they have been together. Nick was a player for Southern Mississippi whereas Haleigh was on the cheerleading team.

As time passed by their love started growing more. On 19th December 2016, Nick decided to take their relationship forward. So he proposed her for marriage which she said yes to. Their marriage was held on 15th July 2017. The romantic couple is often spotted going on vacation in some of the exotic places.

In August 2019, Nick and Haleigh became parents for the first time. They welcomed a baby boy Luke Clayton Mullens into the world. The good news is shared by Haleigh on her Instagram account.

Before the birth of their baby boy, they parent an adorable Goldendoodle dog named Scout. They often shared pictures with their dog which shows they have a good bond with him.

Who is Haleigh Hughes?

There are many people known because of their famous spouse. Haleigh Hughes is one of them. She is popular as the wife of the famous NFL player Nick Mullens. She caught the media attention after marriage with her husband.

Haleigh was born on 24th March 1994 in Mississippi. She is the daughter of Kellie Hughes and Kiley Hughes. Likewise, she has two brothers with whom she grew up. Born in Mississippi she belongs to American nationality.

Now moving towards her education, she attended the University of Southern Mississippi. When she was in University, she was in the cheerleading team. From there she graduated with a degree in liberal arts and science and a minor in psychology.

In the year 2012, she worked as an instructor at the Universal Cheerleaders as she was in the cheerleading squad of her University. After that, she worked as a recruiting assistant at Southern Miss.

At present, she works as a teacher, teaching 4th-grade students at Oak Grove Upper Elementary.

As the career of Haleigh is not much open her exact earning is unknown. But she shares the net worth of her husband. Nick has an estimated net worth of $500,000. Similarly, he has signed 2 years contract with San Franciso 49ers for $1,050,000.