Hallie Eisenberg is an American former actress. She is best known for Pepsi commercials. She is possibly single. 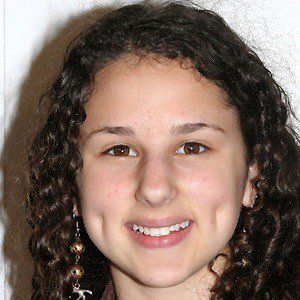 Hallie Eisenberg might be currently possibly single. Earlier, she dated a television and film actor, Zachary Browne. But, their current relationship status is unknown whether they are still in a relationship or separated.

She was also linked with Matt Dillon in 2009.

Who is Hallie Eisenberg?

Hallie Eisenberg is an American actress. She is best known for her role as Erika Tansky in ‘How to Eat Fried Worms’ and for being ‘The Pepsi Girl’ in a series of Pepsi commercials.

She was born on August 2, 1992, in East Brunswick, New Jersey, USA. Her birth name is Hallie Kate Eisenberg and she is currently 28 years old.

She has got a nickname as Howie. Her father’s name is Betty Eisenberg and her mother’s name is Amy Eisenberg. Her father ran a hospital and later became a college professor whereas her mother was a professional clown who performed at children’s birthday party in their hometown of New Brunswick.

She has got two siblings: Kerry and Jesse Eisenberg. Jesse is an Academy Award-nominated Star of ‘The Social Network’.

She was named after the character of Hallie O’Fallon in the film ‘All I Want for Christmas’.

She grew up in a secular Jewish family. Hallie holds American citizenship and her ethnicity is Ashkenazi Jewish.

Talking about her education history, she attended American University in Washington, DC.

Hallie Eisenberg began her career by appearing in the commercials. She appeared in a series of Pepsi commercials as ‘The Pepsi Girl’ in the late 1990s and early 2000s.

Hallie debuted her film career from the film ‘Paulie’ in which she portrayed the role of the younger owner of the title parrot, Marie Alweather. In addition, she appeared in the feature film ‘Beautiful’ in 2000, but the film received negative reviews. Later in 2004, she made her appearance in the television remake of ‘The Goodbye Girl’ opposite Jeff Daniels and Patricia Heaton.

In 2006, she portrayed the character, Erika, in the film ‘How to Eat Fried Worms’, which is the New Line Cinema adaptation of the book of the same name. Also, she made her Broadway debut from the play ‘The Women’. In 2010, she took a break from her acting career in order to attend college.

She has an estimated net worth of around $2 million and she has earned that sum of money from her acting and commercial career.

She is rumored to be dating Matt Dillon but neither of them has talked about the rumor.

Hallie Eisenberg has a height of 5 ft.1 inches and she weighs 50 kg. Also, she has got brown hair and brown eyes. Her body measurement is 32-23-33 inches.

To know more about Paris Berelc, Aimee Teegarden, and Katherine Waterston, please click on the link.