Hallie Jackson, a correspondent for NBC, worked for MSNBC, NBC. She is in a relationship with Frank Thorp and is the mother of a baby girl.

Hallie Jackson is dating Frank Thorp. Her boyfriend, Frank is a TV reporter and producer.

In November 2019, she revealed that she is pregnant and expecting her first baby soon.

In March 2020, she gave birth to her first baby, Monroe Jackson Thorp.

Previously, she was married to Jackson Doug Hitchner. They were college sweethearts and Doug proposed to her in 2010 and they married in the year 2011 at Perkasie, Pennsylvania, Bucks County.

Doug and Jackson’s marriage came as a surprise to all. Their wedding was an intimate, formal affair with only close friends and relatives attending. However, the couple divorced. 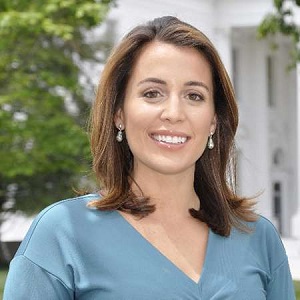 While we were not expecting the child of two journalists to arrive 3 1/2 weeks ahead of her deadline, Ro clearly saw no need to wait any longer.

It just makes us all the more eager to see the world through her big, curious eyes.

Who is Hallie Jackson?

Hallie Jackson is an American TV journalist. She is currently a Chief White House correspondent for NBC News, and an anchor for its cable division, MSNBC.

Further, she is also a fill-in anchor for Today. Before joining NBC, she worked for various news agencies.

Hallie Jackson was born Hallie Marie Jackson on April 29, 1984, and raised in Yardley, Pennsylvania by her mother, Heidi Jackson.

Her father is David Jackson. There is no information about her siblings.

She is of English-Scottish heritage.

She graduated high school from her native Yardley, Pennsylvania at Pennsbury High School in 2002.

Then in 2006, Hallie joined Johns Hopkins University and graduated Phi Beta Kappa, with a Bachelor of Arts degree in Political Science.

She started her career at WBOC-TV in the towns of Salisbury, Maryland, and Dover, Delaware in 2006 and worked for two years.

Hallie Jackson left the job in 2008. Her career led her to Hearst Corporation in 2012, where she reported for their 26 stations from Washington, D.C.

After that, she became an NBC News reporter and journalist in 2014 and covered the Ted Cruz presidential campaign for the network as their embedded reporter.

She hosts the live show with MSNBC News Today.

Recently, she shared the type of food for busy business travelers like her who need to rush from one place to another.

She said that she finds the necessary diet in baby food and it is completely okay for adults as well.

But the controversy is that they are still researching whether the food is healthy enough for adults.

Hallie’s eyes are hazel brown and her hair chestnut brown. Her shoe size is 7(US), bra size is 34B and dress size is 6(US).