Updated On January 29, 2023 | Published By: Eric Jones
Share this
In Relation 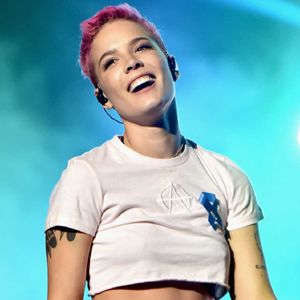 I wear my personality on my sleeve, for sure, and my look is constantly changing because so am I

The environment around you shapes who you are. How you handle an emergency or how you react when someone is rude to you, that's you.

What is the relationship of Halsey?

Previously, she was in a relationship with a British artist Yungblud. They began dating in 2019. Prior, she was dating a rapper G-Eazy from 2017 to 2018.

Halsey’s birth name was Ashley Nicolette Frangipane. She was born on September 29, 1994, in Edison, New Jersey, U.S. Her father’s name is Chris Frangipane who manages a car dealership and her mother’s name is Nicole Frangipane, a security officer in a hospital. She also has two brothers, Sevian and Dante. Hasley was raised in the same place she took birth.

She is American by nationality and has the ethnicity of African-American, Irish, Italian, Hungarian. Hasley suffered from bipolar disorder and attempted suicide for which she was sent to a Psychiatric Hospital. Halsey got her inspiration from her parents to be an artist. Halsey had to stay in the basement during her childhood. Her parents rejected her to enter the home.

A time came when she had only $9 dollars and bought a few Red Bulls just to be awake the whole night. She said, “it was less dangerous to not sleep than it was to sleep somewhere random and maybe raped or kidnapped”.

Halsey couldn’t complete her dream of gaining a degree in fine arts due to a lack of money. Even though she went to a community college and majored in creative writing.

She did many shows across the US on various stages just to pay the bills for her leaving. After dropping out of college her parents jolted her out of the house, as a result, she has to live in random basements.

In 2012 she was seen on YouTube as a starter. She uploaded many cover songs there. She also uploaded a parody of Taylor Swift’s song which received worldwide attention. Her song Ghost became a hit and Halsey got a lot of popularity from it after which she got a chance to sing for Astralwerks Record.

Her play Room 93 was released in 2014. Halsey released her debut album Badlands and promoted it in several interviews. In 2017 her singer Not Afraid Anymore was released which also appeared in the movie Fifty Shades Darker. Her second album the Hopeless Fountain Kingdom topped on the US Billboard 200. She also did a world tour to promote the album.

What is the net worth of Halsey?

Her success and fame are rising heights with her music career making her successful in the related field. She has a net worth of $5 million(2018) but there is no information regarding her salary.

Rumors are flowing that Hasley is dating Ashton Irwin and many sources said that she dated Justin Bieber, Ruby Rose, Josh Dun, and Jared Leto but there is no confirmation about it.

How tall is Halsey?

Halsey is a very beautiful singer. She has well maintained a slim body with a body measurement of 34-25-35. Her height is 5 feet  4 inches and 54 kg of weight. She has blonde hair color and attractive hazel eyes. Warner wears the dress of size 6 US and shoes of 7 US.