Updated On December 20, 2022 | Published By: Gill
Share this
Married 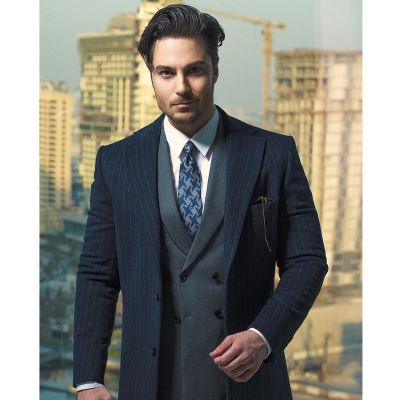 Life isn’t perfect, but it has perfect moments with my love @elnaz_golrokh ❤️

Love is the whole thing. We are only pieces.

Who is wife of Hamid Fadaei?

Hamid Fadaei is married to model Elnaz Golrokh. His wife Elnaz is also a makeup artist, influencer, and model. They are a lovely couple and Hamid constantly posts photos with his wife on Instagram.

The couple do not have any children yet.

Who is Hamid Fadaei?

Hamid Fadaei, the most handsome man in the middle east is a model from Iran. Hamid is a menswear fashion model. He was named the sexiest man by scoop magazine in 2014.

He is also recognized for having been a spokesmodel for Fila Iran. Currently, he is residing in Dubai.

Hamid spends his childhood in Tehran, Iran. He is of Iranian nationality. Hamid has been secretive about his parents and family. His zodiac sign is Cancer.

He has a wife who is also a model Elnaz Golrokh. Hamid fade didn’t mention his parents anywhere and was secretive about their identity.

Talking about the personal life of the model, He started his first modeling career in 2008 and played soccer professionally before becoming a full-time model. Hamid was declared the sexiest man in the Middle East in 2014.

He has done photoshoots with Hollywood A-listers including Zac Efron as well as at the Hugo Boss fashion show. He is a successful and paid model in Iran. Hamid seems to promote cologne brands, Hotels, body products brands Clothing brands, etc.

Hamid was declared the most handsome man in the middle east and also recognized for having been a spokesmodel of Fila Iran.

As of now, the model has not revealed his income, net worth, or Salary. But her wife Elnaz Golrokh net worth is estimated at around $5 million.

There is not much controversy about this model, But he is raising his voice against Iran laws and constantly posting about it on his social media handles as well.

Talking about his physical appearance, Hamid Fadaei has a fair complexion with brown eyes and black hair.

Apart from these, His other body details like height and weight are under review.