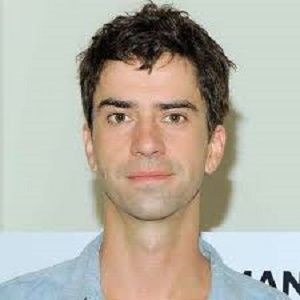 I've never seen anyone handling pans in the streets of New York, and if I did I doubt I'd give them money unless I needed a pan. I do give money to homeless people, whether they ask or no.

I invested all my money in debt. It was an outdoor Shakespeare theater that I grew up at. That feels like home, and the place I'm always trying to figure out how to get to.

I'm a pretty cliché actor in that I hate watching myself on film.

Hamish Linklater is a divorced man but in a relationship. As of 2018, he is dating Lily Rabe.

Previously, on 21 January 2002, he was married to Jessica Goldberg. They have a child (Lucinda Rose Linklater) together.

Due to some irrecoverable differences between them, their relationship ended up in divorce in 2012.

Who is Hamish Linklater?

Hamish Linklater is an American actor and playwright. Moreover, he is popular for playing the role of Matthew Kimble in The New Adventures of Old Christine and Andrew Keanelly in The Crazy Ones.

His father is James Lincoln Cormeny and his mother is Kristin Linklater, a teacher of vocal technique. There is no information about his siblings.

He had an interest in acting and drams from her early days.

In 1994, he graduated from Commonwealth School in Boston and later attended Amherst College.

Hamish Linklater made his big-screen debut in 2000’s Groove, while first establishing himself on the stage. He has appeared in numerous popular movies, including Fantastic Four. Linklater was the main cast member in the CBS sitcom The New Adventures of Old Christine from 2006 until 2010, as the brother of Christine, played by Julia Louis-Dreyfus.

Linklater appeared in Keith Bunin’s The Busy World Is Hushed opposite Jill Clayburgh off-Broadway in July 2006, at Playwrights Horizons. He has also played Hamlet in Costa Mesa at South Coast Repertory, California, and the Long Wharf Theater in New Haven, Connecticut.

Linklater appeared in an episode of Pushing Daisies on Halloween 2007, on ABC, entitled “Girth”.  In the same year, he also completed the film The Violent Kind. He starred with Miranda July in The Future in 2011. Besides that, in October 2011, he made his Broadway debut in Theresa Rebeck’s new play Seminar opposite Alan Rickman, Jerry O’Connell, Lily Rabe, and Hettienne Park.

He played Brooklyn Dodgers pitcher Ralph Branca in 2013, in the Jackie Robinson biopic film 42. He also joined the cast of Aaron Sorkin’s The Newsroom in a recurring role, playing senior producer Jerry Dantana. Linklater was cast in a recurring role in 2017, in the FX original series Legion, based on the Marvel Comics character.

He has not been the part of controversy and rumor as he keeps his personal information secret from the media.

Hamish Linklater: Salary and Net Worth

He earns a huge amount of money but has been keeping it secret to the media and the public. His estimated net worth is about $3 million which he earns from his profession.

Hamish Linklater has an average body with black hair and dark brown eyes with white skin. Furthermore, he is 6 feet 4 inches tall with an unknown body mass.