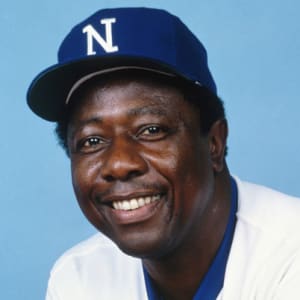 My motto was always to keep swinging. Whether I was in a slump or feeling bad or having trouble off the field, the only thing to do was keep swinging.

It took me seventeen years to get three thousand hits in baseball. I did it in one afternoon on the golf course.

The triple is the most exciting play in baseball. Home runs win a lot of games, but I never understood why fans are so obsessed with them.

Aaron is a married man. He is currently married to Billye Suber Williams. The couple tied the knot on November 13, 1973.

He was married before once. His first marriage was with Barbara Lucas in 1953. They have six children: Ceci, Gary, Lary, Dorinda, Gail and Hank, Jr. He divorced Barbara in 1971.

Who is Hank Aaron?

Born in an extremely poor family, little Aaron had to take up several odd jobs to support his family. With hardly any interest in studies and a passion for sports, he had made up his mind about baseball from a very young age.

Hank Aaron is now a retired American baseball player and is an inspiration for many others. He holds the record for the second-most seasons (8) with 40+ home runs in MLB.

Aaron was born on February 5, 1934, in Mobile, Alabama. He was raised in a poor family along with his seven siblings. His father’s name is Herbert Aaron, Sr. and likely mother’s name is Estella Aaron.

As born in a section of Mobile referred to as “Down the Bay”, he spent most of his youth in Toulminville. As Aaron grew up in a poor family, his family could not afford baseball equipment. But he has so keen interest in it that he practiced by hitting bottle caps with sticks.

He attended the Central High School, where he played football and baseball and was outstanding in both. Later, he transferred to Josephine Allen Institute, a private school, for a better future in baseball. In 1951 he quit school and played for the ‘Negro Baseball League’s Indianapolis Clowns’.

With the success in the 1952 Negro League World Series, he joined the Milwaukee Braves. After this, it put him the minor league baseball ‘Eau Claire Bears’. He made his Major League debut in 1954 and finished the season with a fair .280 hit score.

Hank finished the 1955 season with a .314 average, 27 home runs, and 106 RBI. Aaron played exceptionally well in 1956 and in 1957 he won the ‘Most Valuable Player’ title after making 44 home runs and hitting an impressive .322. The same year he led his team Milwaukee Braves to a surprise victory in the World Series over the New York Yankees.

He reached a whopping 3000 hit in 1970 while playing against Cincinnati Reds and became the first player to reach this far. In 1973, he fell short of one run, in breaking the record of legendary player Babe Ruth, who had a total of 714 home runs.

However, in April 1974 he broke the record and created his own with a massive 715 home runs. The same year on October 5, he hit his last home run to make a total of 733 runs.

It was speculated that he would retire and when did not, his team traded him to Milwaukee Brewers. He broke the ‘Run batted in’ (RBI) record of Babe Ruth once again, in May 1975. In 1976, he retired as a player and joined the Atlanta Braves as their executive and later became their vice-president.

His job was to look for new team prospects and supervise the coaching of minor leaguers which resulted in making the Braves one of the strongest teams in National League. He was later promoted as their senior vice-president.

Aaron was inducted into the Baseball Hall of Fame on August 1, 1982, after a ballot in which he came second. On January 8, 2001, U.S. President Bill Clinton awarded him the second highest civilian award ‘Presidential Citizens Medal’.
Molefi Kete Asante, an African-American scholar, historian, and philosopher, entered Aaron’s name on his list of ‘100 Greatest African-Americans’, in 2002. He received the ‘Presidential Medal of Freedom’ the highest civilian honor, from U.S. President George W. Bush in June 2002.
Furthermore, ‘Hank Aaron Award’ was created in 1999 to be awarded to the best hitter who performs the best in each league.

During his tenure, Hank’s highest salary was $240,000 which he earned in both the 1975 and 1976 seasons. After baseball, Hank launched a successful business career. Today he owns several car dealerships. He owns dealerships that sell BMW, Mini, Land Rover, Toyota, Hyundai, and Hondas all across Georgia.

He is out of any type of rumors or controversies and has maintained a balanced life.

Hank being a sports player has maintained a good body standing with a height of 6 inches. Likely, he weighs 82 kg. He has dark brown colored eyes and short black colored hair.

He is active on different social media platforms. Aaron uses Twitter and has more than 63K followers. Furthermore, he is not active on Facebook or Instagram.