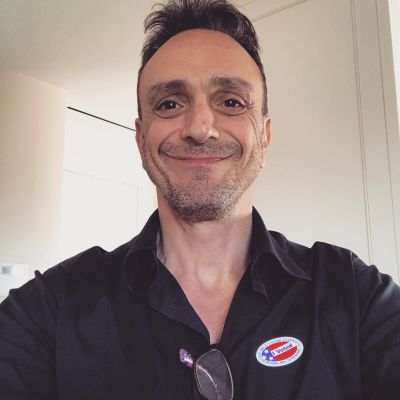 Hank Azaria is in a married relationship with Katie Wright. Katie is a former American actress. The couple started dating each other in 2007 and soon they married to each other.

They have a son, Hal Azaria who was born in 2009. Moreover, they live with a dog, Truman, and two rescued cats, Mookie and Wilson.

The actor was previously dating Julie Warner in the early 1990s.

Further, he was in a relationship with Helen Hunt in 1994. The former couple married in a traditional Jewish ceremony in Southern California on 17 July 1999.

They were also featured in Mad About You and The Simpsons. However, the couple were not happy with each other and ended up separating each other on 18 December 2000.

Going on, He was in a love relationship with Sheryl Crow. Sheryl is a renowned American musician, songwriter, actress, and singer. The couple dated in 2006. However, they did not make it official.

Who is Hank Azaria?

Henry Albert Azaria, popularly known as Hank Azaria is a well-recognized American actor, comedian, voice actor, and producer. Azaria is widely famed for his role on The Simpsons(1989), Free Agents (2011), and The Birdcage(1996).

Moreover, he has also portrayed his great role in many movies such as Godzilla, Run Fatboy Run, and The Smurfs.

Hank Azaria was born on 25 April 1964. At present, his age is 57 years old. Likewise, his birthplace is Queens, New York City, New York, the USA.

Hank is the son of his father, Albert Azaria whereas his mother is Ruth Azaria. His father was a manufacturing businessman. Moreover, Azaria has two sisters as well.

Talking about his nationality, Azaria holds an American identity whereas his ethnicity is mixed (Middle Eastern, Hispanic, Spanish).

Regarding education, the actor studied at Kew-Forest School. Further, he joined Tufts University to study Drama. There, he became friends with Oliver Patt. In response, they participated in many productions like The Merchant of Venice.

Likewise, the actor joined the American Academy of Dramatic Arts. He was a weak student during his school days.

Hank Azaria started his own company along with Platt titled Big Theatre. It only staged one play named, The Dumb Waiter by Harold Pinter. However, Azaria found his growth in his TV career and hence shifted to Los Angeles.

Additionally, the actor voiced many characters like the town bartender, ‘Moe Szyslak’, and Bumblebee Man. Hank has been in The Simpson since 1989 and his great act has proved his acting skills and talents. The actor has earned four Emmy Awards as well.

Moreover, he portrayed the lead role in Herman’s Head that featured from September 1991 that featured for three seasons. Hank has portrayed the assisting role in the American comedy series, Friends. He worked as the voice actor of Eddie Brock/ Venom in some episodes of Spiderman- The Animated Series.

Freshly, Azaria performed the main role of Jim Brockmire in the American TV comedy series, Brockmire in April 2017. The series featured its last episode on 6 May 2020. Moreover, he has emerged in the TV film, The Wizard of Lies and worked as a supporting actor in Norman.

Hank is also renowned for his appearance in the animated comedy movie, The Smurfs. It was directed by Raja Gosnell. The movie was released in June 2011 and earned great success. Later, its sequel, The Smurfs 2 was released in 2013.

Moreover, he received two Emmy Awards for his great performance in the Tv series, Ray Donovan and Tuesday with Morrie. Further, the actor has also received Screen Actors Guild Award and Annie Award.

Successful actor, Hank Azaria has earned a massive amount of money from his acting career. Azaria lives a luxurious lifestyle.  He has been actively working in his profession from 1986 till the present.

It is reported that Hank Azaria has an estimated net worth of $90 million. Similarly, he earned nearly $300 thousand per episode from The Simpsons. From his episodes in The Simpsons, Azaria earns nearly $6.6 million per year.

Moreover, he bought $2.112 million for 4 acre home in the Westchester, New York town of Bedford Corners. As per some sources, his home has been valued at $3.25 million. Also, he purchased a mansion worth $3.1 million in Mamaroneck.

Azaria paid $4.625 million for an apartment in the SoHo neighborhood of New York City. Likewise, he sold his property for $ 8 million to Meg Ryan. Moreover, in May 2014, Hank bought a 3br apartment for $9.225 million at 75 Central Park West.

Director, actor, and producer Hank have never been part of any controversial matter or rumors till now.

It seems that the renowned superstar prefers enjoying his personal life and does not want to merge it with his professional life.

57 years old actor, Hank Azaria has dashing looks, a muscular body, and a charming personality. He stands at a height of 5 feet 11 inches. Also, he has a balanced body weight of 77 kg.

Furthermore, Azaria has brown eyes whereas his hair is black.

Nevertheless, the multi-talented personality has never mentioned other physical details in the public yet.

Regarding his social media presence, Hank Azaria is an active personality on social media. Hank has more than 76.2k followers on his official Instagram account @hankazaria.

He is also active on Twitter with around 283.2k followers.

Moreover, Azaria is also available on Facebook with nearly 339k fans and supporters.

Also read about Anna Sitar, Crazy Nate, and Raz B.

Check Out These 11 Sarcastic Dialogues Of Chandler Bing From FRIENDS!