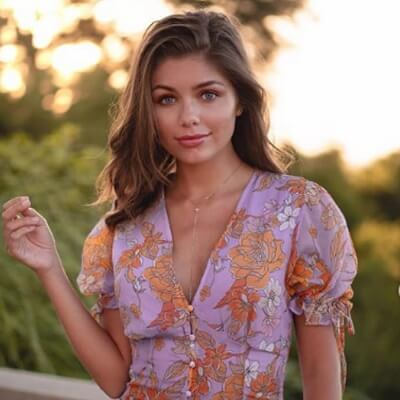 Hannah Ann Sluss is currently single. Previously, she was in a relationship with Peter Weber of ‘The Bachelor’. Sluss actually won and was engaged to Weber. However, they could not work things out as Weber still had feelings for the runner-up of the show, Madison Prewett.

In the two-night finale aired live on March 9 and 10, Pete proposed Hannah Ann Sluss after Madison decided to withdraw. Sluss accepted the proposal and the couple was engaged. However, Weber broke off the engagement and once again ended with Madison.

Now, they have broken up and decided to not take their relationship any further. Fans have criticized Peter for being irresponsible and unable to make correct decisions whereas Hannah’s decision and the way she handled everything was very mature.

Previously, she was in a relationship with a man named Ben Taylor.

Who is Hannah Ann Sluss?

Hannah Ann Sluss is an American TV personality, beauty pageant competitor, and model. She is famous for being the winner of the 24th season of The Bachelor. She is a model represented by Wilhelmina Models and The Block Agency.

Hannah Ann Sluss was born in Knoxville, Tennessee, on 25th April 1996. As of 2020, her age is 23. Many people were asking questions about her unique name and with a story on Instagram, she revealed that it was her grandmother’s name. There is no information about her parents. They have featured in The Bachelor but only as her parents.
She has posted their picture on Instagram and is really close to both her parents. She spent her childhood days with her younger sister, Haley, and brother, Wade. Her ethnicity is Caucasian.

Hannah Ann stands at a height of around 5 feet 7 inches. Moreover, she weighs around 54 kg. Similarly, she has a body measurement of 33-24-34 for breasts, waist, and hips. She wears a shoe size of 7(US) and a dress size of 2(US). She has brown hair and blue eyes.

Hannah Ann Sluss is a model and a reality TV personality. Before she achieved huge fame from ‘The Bachelor’, she had a successful modeling career. She first attracted attention in 2014 when she took part in a beauty pageant. She competed in the Miss Tennessee Teen pageant and finished as the first runner up.

Following that, she started posting pictures on Instagram from June 2015 and gained a lot of followers. Moreover, she also won Miss North Knoxville. In 2018, she took part in the Miss Tennesse USA competition and finished as the first runner up. She publicly revealed that she did a breast augmentation for her modeling career.

In 2016, she has appeared on the cover of JVN Magazine. Similarly, she has also featured in advertisements for the fast-food chain, ‘Sonic’ and ‘Downy detergent’. In 2018, she appeared in the music video of ‘I Don’t Know About You‘ by Chris Lane.

In 2020, Sluss appeared in the 24th season of The Bachelor. Hannah finished as the winner and was engaged to Peter Weber. However, on the live ‘After the Final Rose’ special episode, they revealed that their relationship has ended because he still had feelings for Madison Prewett who was the runner-up of the show. The way Hannah handled the situation increased her fans and followers. Stars like Kim Kardashian West showed their appreciation on Twitter. She told Peter, ‘If you want a woman, be a real man’.

Hannah Ann Sluss has an estimated net worth of around $500k. From The Bachelor, she earned around $70,000 to $90,000. However, there is no information about her average annual salary. An average American model earns around $45,000 a year.

For education, she attended the University of Alabama.

There are no rumors about Hannah. However, the Finale of the show, which was watched by a lot of people was surprising and controversial. Sluss’ handling of the situation was appreciated and loved by many.

You may also like to read the Bio, Career, Net Worth, Social Media, Relationships, and more of Lucky Blue Smith, Xavier Serrano, Sofia Villarroel, and more.