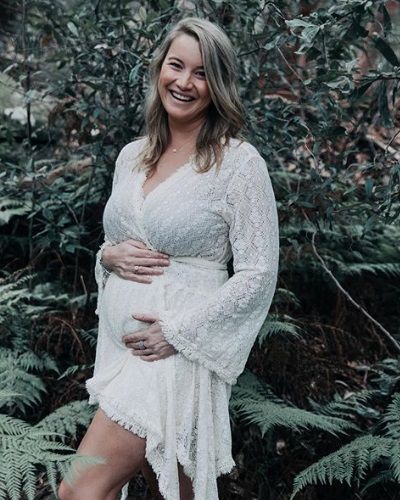 Reality star Hannah Ferrier revealed on 9th June 2020 that she is pregnant with her first child. Hannah revealed the good news through her Instagram account and wrote,

“You are already my favourite adventure ???? ???? @poppypetersonphotography”

This news came after she officially left the show Below Deck Meditteranean after its 5th season. Following the news of her pregnancy with mystery boyfriend Josh, the Below Deck family showed excitement, and Past and present yachties sent Hannah messages of love and support.

Other crewmates Jamie Jason, Anastasia Surmava, Bugsy Drake, and June Foster also showered love for her after the news of the upcoming little one. Anastasia tweeted,

“Congrats to my beauty @hannahferrier_ on her new adventure. You are going to be the best mom ever.”

Hannah revealed that she is five months along and her boyfriend Josh is overjoyed about their little one. She said,

“little mini-me on the way. He’s over the moon. He’s so excited.”

Likewise, Ferrier also knows the sex of the baby and has already picked a name.

Hannah Ferrier and her boyfriend

At the time, she was away from work and they were celebrating their successful relationship. Fans speculated that her relationship is pretty serious. She had also posted a video of her on Instagram which hinted on her new relationship. She was eating a dessert with a glass of champagne in her hand. There was a man’s voice in the video. She said,

In one of the videos, fans noted that she was rocking a ring on her engagement ring finger, but she did not address the observation.  On her Instagram story, she wrote,

Her relationship is going strong as she is expecting her first child with boyfriend Josh.

What is Hannah Ferrier’s age?

Hannah Ferrier was born on 23rd November 1986 in Sydney Australia. The Australia-born reality star is 33 years old. She began traveling internationally when she began working on yachts.

Hannah was a salesgirl before she became famous. She had an inspiration to travel through Europe. She started her first career by working on yachts in Australia.

Hannah Ferrier no longer in Below Deck: Mediterranean

Hannah Ferrier was Chief Stewardess for the 150-foot yacht on the spin-off Bravo series Below Deck Mediterranean, based on the original series Below Deck. But as per sources, she was fired after five seasons of the show. However, she revealed that she was not fired but she quitting the seaborne show because she doesn’t want to be locked into a yacht.

Before she announced quitting the show there was news that she was fired. As per sources, she was in trouble for hooking up with a charter guest in the past. Hannah said,

“I think I’m probably done. I learned when I first started yachting in my very early 20s, you know, I would see these women who were in their late 30s, 40s, sitting at a bar, getting wasted with 20-year-olds living in a tiny cabin, and I was like, I don’t want [that].”

“I want this to be a good, fun, enriching experience that allows me to travel a lot, but I don’t want to get to the stage where I’m locked into yachting and there’s nothing else in my life except that.”

She has been the chief stew on Below Deck Med since its premiere in 2016. Hannah said that she actually came to the decision that she was ready to be done with yachting before returning for season 5. Likewise, she just needed one last go to confirm her choice. She admits she’s interested to see how her attitude comes across on screen as the season airs.