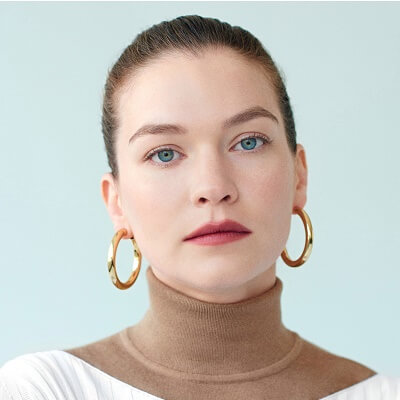 Hannah Gross is currently single and not dating anyone. She seems more focused on her career as of now. Also, in an interview, she claimed that the best piece of advice she ever got was that women should never be seriously involved in dating in their mid-20s.

She has revealed that her celebrity crush is Paul Newman.

Who is Hannah Gross?

Hannah Gross is a Canadian actress. Her best-known work is the portrayal of Debbie Mitford, the love interest of one of the three main characters of the Netflix series, ‘Mindhunter’.

Hannah Gross was born in Toronto, Ontario, on September 25, 1990. As of 2020, her age is 29. She was born to parents Martha Burns (mother) and Paul Gross (father). Both of her parents are actors. Her father, Paul is a Canadian actor, producer, director, singer, and writer well-known for his works in ‘Due South’, ‘Passchendaele’, ‘Slings and Arrows’, etc. Her mother, Martha is a Canadian actor best known for her portrayal of Ellen Fanshaw in the series, ‘Slings and Arrows’.

She is one of her parents’ two children, she has one brother named Jack Gross. She spent her childhood with her family in Toronto. Her ethnicity is Irish, Scottish, German, Canadian.

Talking about her education, she went to New York University’s Tisch School of the Arts. From there, she graduated with a Bachelor’s degree in Fine Arts in Theatre. She minored in Religious Studies.

Hannah Gross actually made her screen debut at the age of 11 in the 2002 movie, Mens with Brooms. She had an uncredited role in the film which was directed by her father and he also played the starring role in the movie.

Her professional acting debut came in 2010. She portrayed Katie in the 1984 play, ‘Doc’ and also directed ‘A Streetcar Named Desire’ for the Stella Adler Studio of Acting. A couple of years later, she performed in the 1953 one-act play, ‘Talk to Me Like the Rain and Let Me Listen’.

In 2017, Gross starred in the Netflix original drama. ‘Mindhunter’. She portrayed Debbie Mitford, the love interest of one of the lead characters, FBI Agent, Holden Ford. The crime thriller web series aired for two seasons but the third has been put on indefinite hold.

She has appeared in a number of movies after Mindhunter including Joker, Tesla, Falling, The Mountain, Her Smell, etc. She has also appeared in other TV series such as ‘The Sinner’ and ‘Deadwax’.

How much is Hannah Gross worth?

Hannah Gross has an estimated net worth of around $1 million. There is no information about her salary. On average, an American actress earns around $40k a year.

Gross has not been involved in any controversies. She has been able to keep herself away from any type of controversy and scandal. So far, she has not done anything controversial in her career. Similarly, there are no rumors about her of any kind.

You may also like to read the Bio, Career, Net Worth, Body Measurements, Social Media, Relationships, and more about Adam West,  Slade Smiley, Nick Cordero, and more.