Model Hannah Jeter is married and a mother of two. 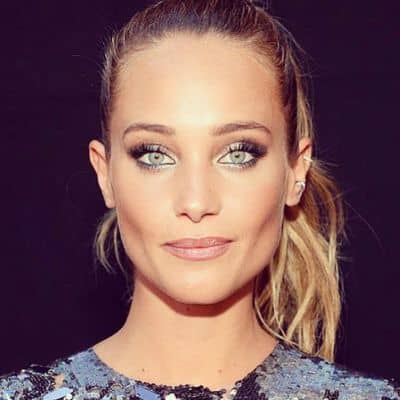 Talking about her relationship details, Hannah Jeter is happily living a married life with her longtime partner, Derek Jeter. Jeter is a well-named American professional baseball shortstop who played for the NEW York Yankees.

The couple started dating in 2012 and tied the knot on 9 July 2016 in Napa Valley. Moreover, they welcomed their first child as a daughter in August 2017. Also, they were blessed with their second daughter in January 2019.

Who is Hannah Jeter?

Hannah Jeter is a well-recognized American model and television host. Jeter is widely famed for her appearances in the Sports Illustrated Swimsuit Issue, including the cover of the 2015 edition.

Moreover, she is also known as the face of Ralph Lauren’s fragrance Ralph Rocks.

Hannah Jeter was born on 5 May 1990. At present, she is 31 years young star. Likewise, her birthplace is St. Thomas, U.S. Virgin Islands, the USA.

Hannah is the daughter of her father, Conn Davis whereas her mother is Deborah Behm. Moreover, she has two siblings named Conn Davis Jr and Rachel Davis.

Talking about her nationality, Jeter holds an American identity whereas her ethnicity is German, Irish.

Hannah began her career in campaigns for Ralph Spring/Summer runway show. She also became the face of the Ralph Lauren fragrance, Ralph Rocks in 2006.

The star featured on two individual covers for the Italian magazine D in 2006, Mexico’s Elle in August 2009, France’s FHM in September 2012, and South Africa’s FHM in April 2013.

Moreover, Jeter appeared as a model for Victoria’s Secret and American Eagle Outfitters, Tommy Hilfiger, and Levi’s. She then worked in five editions of the Sports Illustrated Swimsuit Issue from 2013 to 2017. Later, she was the cover model of the 2015 issue.

The model has also acted in the movies. In 2015, Hannah performed in the comedy movie, Vacation. Also, she is popular for hosting a program, Project Runaway: Junior. In the same year, the star worked in a bit part in the comedy film, Vacation.

A famed American star, Jeter has earned a handsome amount of money from her profession. She lives a lavish lifestyle along with her family.

It is reported that Hannah Jeter has an estimated net worth of $3 million. She has brand endorsed for DirecTV Genie and other brands as well.

In May 2014, Hannah’s private photo got leaked online which contained some semi-nude selfies which created a lot of controversies.

Other than that, Hannah has never been part of any controversial matter or rumors till now.

It seems that Jeter prefers enjoying her personal life and does not want to merge it with her professional life.

31 years young star, Jeter has beautiful looks and an admirable personality. She stands at a height of 5feet 9inches. Also, she has a balanced body weight of 53 kg.

Furthermore, Jeter has green eyes whereas her hair is brown. Her body measurement is 34-26-35 inches(chest-waist-hip) respectively.

Regarding her social media presence, Hannah Jeter is an active personality on social media. Hannah has more than 613k followers on her official Instagram account @hannahbjeter.

She is also active on Twitter with around 117.3k followers.

Moreover, Jeter is also available on Facebook with nearly 563k fans and supporters.