Updated On October 20, 2021 | In Married , Relationship , Sexuality
Share this 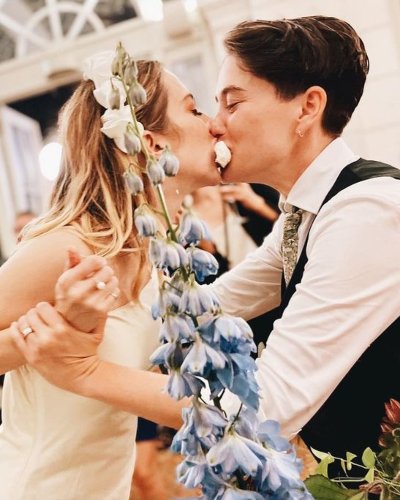 Hannah Lieberman and Molly Bernard are happily married! On 24th September 2021, Molly announced that she tied a knot with Hannah on her Instagram. She shared the wedding news by posting a photo of herself and Hannah from the wedding. Molly wore a white gown from WRAY NYC for the ceremony. She walked down the set of wooden stairs with Hannah following her in the photograph.

Likewise, Hannah donned a custom suit from Bindle & Keep. She captioned it,

“WIVES! Perfect day, perfect party. Perfect photo by @lesloups perfect couture dress by @wraynyc perfect custom suit for H by @bindleandkeep perfect fleurs by @fleurotica WHAT A SURREAL JOY TO BE MARRIED TO MY TREASURE!”

The wedding location was The Boathouse in Brooklyn, New York. She announced the engagement in January 2020 by posting a picture that featured them and their dog Henry. Also, the wedding ring was a half halo around the bauble.

Also read Anthony Davis is married to his partner Marlen P in a ceremony attended by Adele!

What is the age of Molly Bernard?

Molly Bernard was born on 10th April 1988 in Brooklyn, New York. She is 33 years old at present. She is the granddaughter of actor Joseph Bernard who was the co-founder of Lee Strasberg Theatre and Film Institute.

Similarly, she has a bachelor’s degree from Skidmore College and an MFA in acting from Yale School of Drama.

Molly Bernard plays pansexual publicist Lauren on Younger. She revealed that her playing a pansexual character helped her understand her own personal sexuality. Likewise, she said,