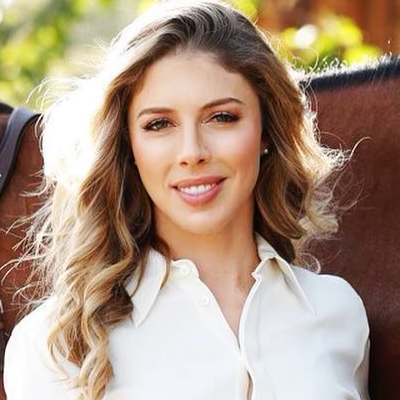 Talking about her love life, Hannah Margaret Selleck is presently in a living relationship with her boyfriend, Beto Gutierrez. She is one of the personality who does not prefers to share her relationship things on the media and public.

Selleck has shared some photos of them on her official Instagram. However, her relationship details are still behind the curtain.

Who is Hannah Margaret Selleck?

Hannah Margaret Selleck was born on 16 December 1988. At present, her age is 32 years old. Likewise, her birthplace is Los Angeles, California, the USA.

Hannah is the daughter of her father, Tom Selleck whereas her mother is Jillie Joan Mack. Her dad is a well-named American actor and producer known for Magnum, P.I., and Three Men and a Baby, and her mom is a well-named British actress known for her role in Silver Fox, Fraiser, Magnum, P.I. The athlete has one step-brother, Kevin Selleck from her father’s first marriage.

Talking about her nationality, Selleck holds an American identity whereas her ethnicity is Caucasian.

She shifted to Thousand Oaks-Westlake Village where they lived in a ranch house, and from there, she began horse riding.

Regarding education, Margaret completed her high school and attended Loyola Marymount University for higher education. She completed her graduation in 2011 with a degree in Communication studies.

Margaret was fascinated by horse riding from her childhood. Her love for horses and horses rising continues to rise throughout her teenage years and early adulthood. Her dad and mom are renowned actors and actresses. Despite highly familiar with to film industry, Hannah decided not to make her career in the industry.

She chose to become a world-class equestrian. To the moment, Selleck has won many prized like the Silver Team Medal at the Prix de States in 2005 and the 16-year-old Equitation Championship at Capital Challenge in the year 2006. Moreover, she is a world-class jumper and has participated at the Grand Prix Level.

Hannah’s appearance includes the Gucci Masters tournament in 2011 and the 2015 Longines Masters in her hometown of Los Angeles. After completion of her graduation, Margaret started to work in the corporate world. She interned at a public relations firm in Beverley Hills for six months.

Later, Hannah returns to horse riding. She has also collaborated with her father, Tom. Presently, she runs a Descanso Farm’s boutique breeding stable in California. Her farms trans young horses, growing them into quality sports horses which are then sold or used by her.

Additionally, she is an ambassador for an equestrian charity- JustWorld International as well.

Prominent personality, Selleck has earned a handsome amount of money from her multiple profession.

It is reported that Hannah Margaret Selleck has an estimated net worth of $1 million. She has won several competitions and medals as well. Her average salary is estimated to be $34,000.

However, the sportsperson has not disclosed her exact salary, earnings, and assets details till now.

Hannah has never been part of any controversial matter or rumors till now. The sportsperson has been preoccupied with her professional and private life.

It seems that Margaret prefers enjoying her personal life and does not want to merge it with her professional life.

She stands at a height of 6 feet 4 inches. Also, she has a balanced body weight of 65 kg.

Furthermore, Selleck has blue eyes whereas her hair is blonde.

Nevertheless, the prominent rider has never mentioned other physical details in the public yet.

Regarding her social media presence, Hannah Margaret Selleck is an active personality on social media. Hannah has more than 21.2k followers on her official Instagram account @hannahselleck.

She is also active on Twitter with around 3.1k followers.

Moreover, Selleck is also available on Facebook at the moment.