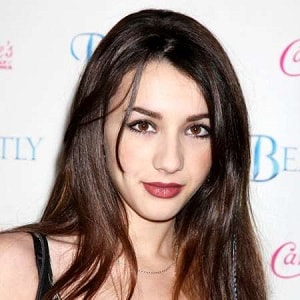 “I'm a vegetarian and change my hair color as much as I can.”

Hannah Marks is living her single life. There is no rumor heard about her affair and relationship.

Hannah might be focusing on her career rather than being in a relationship.

Who is Hannah Marks?

Hannah Marks is an American actress, director, and writer. She is famous for her role as Amanda Brotzman on the television series ‘Dirk Gently’s Holistic Detective Agency’.

She was born on April 13, 1993, in Los Angeles, California, USA. Her birth name is Hannah Gayle Marks. Her father’s name is Robin Marks and her mother’s name is Nova Ball (a former actress).

She grew up in San Luis Obispo, California. Ernie Ball, Hannah’s maternal grandfather was an entrepreneur and musician and her maternal great-great-grandfather, Ernest Ball, was a composer.

She holds American citizenship and her ethnicity is a mix of Ashkenazi Jewish, Sephardi Jewish, English, Irish.

There is no information available regarding Hannah’s education history. However, it is under review.

Hannah Marks appeared as Lizzie Gaines in the 2006 feature film ‘Accept4ed’ and has a guest role in many television programs such as ‘Ugly Betty’ and ‘Weeds’.

She was featured in the cover story of ‘The NewYork Times Magazine’ on June 4, 2006, with her friend Liana Liberto.

Hannah portrayed the role of Tammy in ‘The Runways’, a 2010 biological film about the 1970s all-girl rock band of the same name.

She was starred in the BBC America original Dirk Gently’s ‘Holistic Detective Agency as Amanda Brotzman. She was named as the director for an upcoming film adaptation of the John Green novel, ‘Turtles All the Way Down’ in January 2019.

Her exact net worth, salary, and income have not been revealed yet. It is under review.

She likes to keep her information more secret. She has not been involved in any rumors and controversies to date.

Hannah Marks has a height of 5 ft. 3 inches and she weighs 53 kg. She has got hazel eyes and dark brown hair. Her body measurement is 32-22-34 inches.

To know more about Richard Karn, Doug Savant, and Angie Janu, please click on the link.