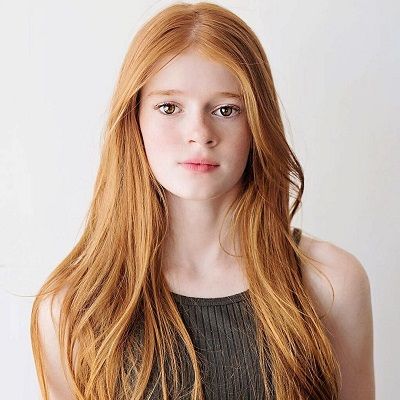 Previously, she was dating The Umbrella Academy star, Aidan Gallagher. They started dating in 2017. On their 5th Anniversary, Aidan shared their cute photo on Instagram. However, they are no more together.

Hannah loves to draw and take her photo.

Who is Hannah McCloud?

American Hannah McCloud is an award-winning actress. McCloud is renown as Holly of the movie, Tenured.

Last, in 2019, she featured in the short movie, And Yet They Speak.

Hannah McCloud was born on the 6th of November 2003 in Los Angeles, CA. She is of British-Scottish ancestry.

She is the second among his two siblings, Skyler and Madelyn. Her younger sister, Madelyn is also a model.

Currently, the actress is homeschooled due to her hectic schedule and lives with her family. Later, she attended the drama school, Marnie Cooper School of Acting in Los Angeles, California

She started his career as an actress at the age of 11, with the short movie, 2014- Life in Color as Georgia. The short movie is about a little girl who discovers her true happiness by being herself.

One year later, in 2015, she appeared in the TV series, Revenge as the Young Louise for an episode only. Later, the role was played by actress, Elena Satine. In the same year, she debuted movies with the comedy, Tenured which was released in NetFlix.

In 2016, she was cast in the supporting role of Violet in the 16-minute drama, Go Out in Violet Waters. After the short, she featured the music video Mayday of the country singer CAM.

In 2016, she was awarded San Diego Film Award for the movie, Go Out in Violet Waters as Best Supporting Actress.

Her average earning as a music video model is $56k US or above.

She is a brown-eyed blonde. Her height is 5 feet and 5 inches.

She also has a self-titled YouTube channel with 351 subscribers