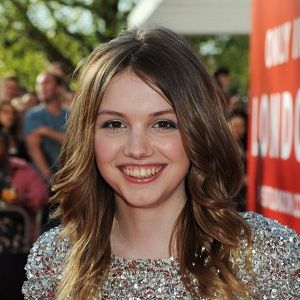 we would mime doing surgery on animals. We treated more injuries than illnesses - fixing with a baby bear with a broken leg, removing a tumor. Of course, our surgeries would take about five seconds

that's how good we were

Do people ever ask me to say 'Wow?' Never in interviews, but a few times on the street. I don't do it. I try to get away from them as quickly as possible and explain that I'm not a performing seal.

Hannah Murray is possibly found to be single. There isn’t any solid proof regarding her marriage and children.

Who is Hannah Murray?

Hannah Murray is an English actress who is best known for portraying Gilly in the HBO series Game of Thrones. She is also commonly known as Cassie Ainsworth for her role in the teen drama series ‘Skins’.

Talking about her early life, she was born on 1st July 1989. She experienced her childhood in Bristol, England.

Her father, Martin Murray is a professor at University, and her mother, Rosemary Silvester is a research technician. Her real name is Tegan Lauren-Hannah Murray.

Regarding her education, she studied at Queens College, Cambridge where she earned a degree in English and later joined North Bristol Post 16 Centre.

She also started to take drama classes which made her fall for acting. Murray was a member of the Bristol Old Vic Young Company. Murray is a Vegetarian.

Hannah Murray gave a start to her career when she started auditioning for the teen drama series ‘Skins’ at the age of 16. She got selected and made her debut with the series. She appeared as the main cast in ‘Skins’ for 19 episodes.

After then she started to appear in numerous movies and television series including ‘In Bruges’, ‘Chatroom’, ‘Above Suspicion: The Red Dahlia’, ‘Game of Thrones’, and much more. She played the role of Prostitute in the movie ‘In Bruges’ but her scene has been deleted. On ‘Game of Throne’ series, she is mostly known for having an affair with Samwell.

Besides movies and television series, she also did a commercial for Nokia in which her voice can be heard on 5300 advertisements. She has appeared in the music video for Belle and Sebastian in ‘Your Cover’s Blown (Miaoux Miaoux Mix)’.

Hannah Murray: Salary and Net Worth

Her net worth is $1 Million but her salary is unrevealed.

Talking about her rumors and controversy, there was news that she has been dating her co-star John Bradley. Besides this, she has not been in any controversy and rumors.

She has light brown hair color and her eyes are brown. Besides, there is no other information about her body measurements.