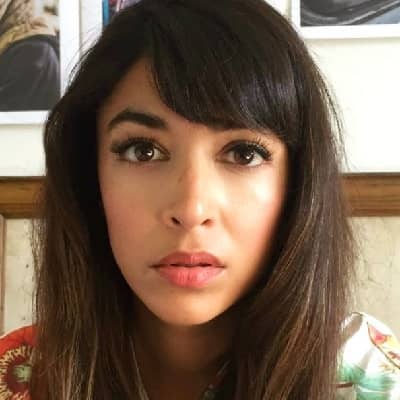 Hannah Simone is living a happy conjugal life. She is married to musician Jesse Giddings. The couple started dating in the year 2012. After dating for nearly four years, they tied the knot in July 2016.

In April 2017, Simone announced her pregnancy and gave birth to their son in early August 2017.

Who is Hannah Simone?

Hannah Simone is a British-Canadian actress, host, fashion model, and former VJ. She rose to fame after appearing on the Fox sitcom New Girl as Cece.

Hannah was born to an Indian father Naren Simone and an English mother of German, Italian, and Greek Cypriot Helen. She was born in London on August 3, 1980, but raised in Calgary.

The actress holds dual nationality of British and Canadian and belongs to mixed ethnicity of Indian, Geek Cypriot, Italian, and German. She has also a brother named Zack.

She lived across the world throughout her childhood, attending schools in each one. At the age of 13, she moved to Cyprus where she worked as a fashion model.

Similarly, she moved to New Delhi, India at the age of 16 where she attended the American Embassy School.

At the age of 17, she relocated to Canada and attended the University of British Columbia in Vancouver from where she received a Bachelor’s degree in International Relations and Political Science.

Then, she went to Hounslow, United Kingdom for a year where she worked as a human rights and refugees officer. After a year, she returned to Canada then joined Ryerson University, and graduated in the year 2005.

Hannah made her acting debut in the year 2005 through the UPN televisions series, Kevin Hill. The same year she appeared in a guest role in the crime drama television series Kojak.

Simone made her career breakthrough after starring in the hit TV show, New Girl and was cast in the role of Cece Parekh, the best friend of the title character Zooey Deschanel.

Simone was the host of HGTV Canada’s television show pace for Living in its first season. She worked at MuchMusic as a news presenter for “Much News Weekly” and, the host of the show The NewMusic.

Further, she was featured in Train’s music video “Angel in Blue Jeans alongside Danny Trejo in 2014.

In 2018, Simon was offered to play the lead in ABC’S reboot of The Greatest American Hero however, she rejected the proposal for the series.

As of 2022, Hannah Simone has an estimated net worth of $3 million throughout his multiple profession as an actress, television host, and model.

Further, her salary, yearly income, and other assets are still under review.

Hannah stands at a height of 5 feet 7 inches tall and weighs about 55 kg. Her waist and hips sizes are 25 and 36 inches.

Her bra size is 38B and her dress size is 2 (US). Likely, she has dark brown hair color and as well a dark brown pair of eyes.