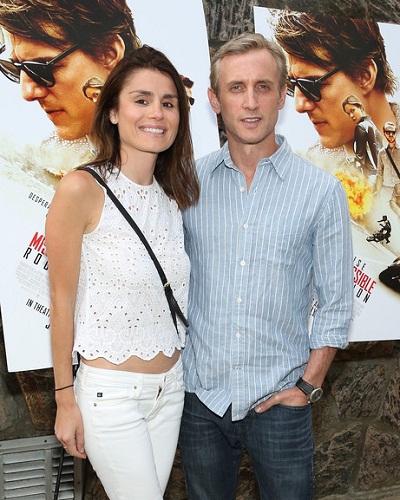 In 2009, at a party to celebrate The Hunger a memoir by John DeLucie, a mutual friend introduced Dan and Florinka. Even though Dan didn’t recognize her but, Florinka told Dan that we have met each other a few times.

“We had met a few times before, which Dan claims didn’t happen, but he meets a lot more people than I do, and he was famous.”

At the time when Florinka and Dan met, she had just come out of a relationship. She was not looking for someone new, but as they met she was attracted to him.

Having a busy Schedule Dan was not looking for any relationship.

Announcement of having a baby

Dan and Florinka started dating in 2010. In January 2012 the couple announced that they are having a baby. Dan said,

“Florinka and I are really excited about this. I have been looking forward to having a child for many years.”

Their son, Everett is now four years old now. Both Dan and Florinka are busy building their career. They are doing well in their professional life. And their son is another blessing for them.

You may like to read The American boxing commentator Max Kellerman caught farting throughout the “First Take” debate? Know about his married life and children

Living happily with their son

Though Dan has been in a few relationships in the past, it is said that he has never been in a serious relationship. It seems like he was waiting for Florinka.

He dated the celebrities like Elisabeth Rohm, Jamie Murray, and, Renee Zellweger before being in a relationship with Florinka.

Florinka currently resides in New York with her boyfriend and a son. Their bond seems to be stronger than before after their first child.

They named their child name ‘Everett’ who was born in January 2012. The son named was named after Dan’s father, Everett Floyd Abrams.

Their son gets all love and care needed

Dan said that in their apartment there was a room where children were not allowed. But now their son runs and plays all over the apartment.

It seems that they want their son to get all that’s needed. Even Everett’s grandfather Floyd Abrams babysits him whenever the couple is outside.

Pesenti is the Director of Public Relations for Gucci. She is also famous for winning “The Amazing Race” as she was the first female ever to do so.

Florinka Pesenti often called Flo is currently the director of public relations for Gucci. In addition, she is also the first female winner of ‘The Amazing Race’. She is the current partner of Dan Abrams. More bio…