Actor Harold Perrineau is married and a father of three.

Talking about his love life, Harold Perrineau is happily living married to Brittany Perrineau. Brittany is a well-named American actress and producer known for Felon, Lost, and Saving Face. The couple dated for two years and tied the knot on 27 August 2002.

Presently, Harold lives happily along with his family without any controversy and rumors of separation. 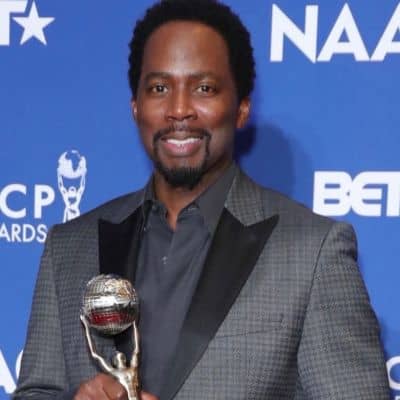 Who is Harold Perrineau?

Harold Perrineau is a well-recognized American actor, musician, and songwriter.

Perrineau is widely famed for his roles as Michael Dawson on the television series, lost(2004-08), Link in the He Matrix Franchise(2003), and Mercutio in Baz Luhrmann’s Romeo + Juliet(1996).

Moreover, he was nominated for the Independent Spirit Award for Best Supporting Male for his splendid performance in the hit indie film Smoke.

Harold Perrineau was born on 7 August 1963. At present, his age is 57 years old. Likewise, his birthplace is New York City, the USA.

Harold is the son of his father, Harold Williams whereas his mother is Sylvia Perrineau. Moreover, he has a brother named Malik Summers.

Talking about his nationality, Perrineau holds an American identity whereas his ethnicity is African-American-Haitian.

Professionally, Harold started his career working in the world premiere of the stage adaptation of the 1980 hit movie Fame. He then portrayed the role of Link in The Matrix series after the original operator Tank was written off the script. He also performed the role of Michael Dawson on ABC’s hit show Lost.

Additionally, Perrineau returned to the main cast for the show’s fourth season. He also appeared in the guest role in the sixth and final season of the show. The actor has also featured in 30 Days of Night: Dark Days along with Rhys Coiro, Mia Kirshner, Kiele Sanchez, and Monique Ganderton.

Perrineau then appeared in the 2008 music video, Yes We Can. He has voiced the titled character from Marvel’s Blade anime series on 4 January 2012. The star then performed as Stevie, the bass player, in the TBS comedy Wedding Band from 2012 to 2013. He then made his Broadway debut in the Roundabout Theatre Company production of Anton Chekov’s The Cherry Orchard.

Other than that, Harold has also worked as a musician. He is actively working with music producer Tomo in der Muhlen on his first album Seeker. His debut single, Moving On was released on 15 October 2011.

Perrineau has appeared in the MKTO-Thank You Music Video. He has also featured as a cop, Nick Armstrong on “The Rookie” for most of Season 2 and as a guest on Season 3.

A talented American artist, Harold has earned a massive amount of money from his profession. He has been active in his profession from the year 1986 till the present.

It is reported that Harold Perrineau has an estimated net worth of $7 million as of 2022.

Harold has never been part of any controversial matter or rumors till now. The actor has been preoccupied with his professional and private life.

It seems that Perrineau prefers enjoying his personal life and does not want to merge it with his professional life.

57 years old actor, Harold has dashing looks and an admirable personality. He stands at a height of 5 feet 10 inches. Also, he has a balanced body weight of 78 kg.

Furthermore, Perrineau has brown eyes whereas his hair is black.

Regarding his social media presence, Harold Perrineau is an active personality on social media. Harold has more than 64.5k followers on his official Instagram account @haroldperrineau.

He is also active on Twitter with around 43.2k followers.

Moreover, Perrineau is also available on Facebook with nearly 4.9k fans and supporters.