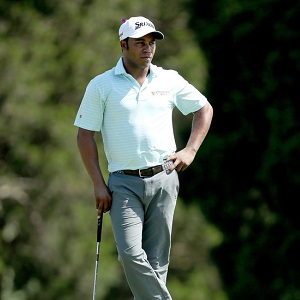 I love entertaining people and what better hole to do it

What is the relationship of Harold Varner III?

Harold Varner III is married to his beautiful wife Amanda Varner. The pair tied the knot in November 2020.

The couple is happily married and is leading a happy conjugal life.

Who is Harold Varner III?

Harold Varner III is one of the avid professional golfers who are currently on the PGA tour. In December 2016, he won the title of “Australian PGA Championship”.

The young and talented golfer is in his struggling stage. He is trying to give his best in every performance.

Presently, he is touring and looking forward to winning many titles.

Harold was born in the city of Akron in the state of Ohio on August 15, 1990. He is of African ethnicity but possesses American nationality.

His mother’s name is Patricia Carter and his father’s name is Harold Varner Jr. He was raised in Gastonia, North Carolina. While growing up, his interest in golf increased which drove his career.

As per his education, he joined Forestview High School where he completed his high school education. He mostly played golf there.

Afterward, he enrolled at East Carolina University. In 2012, he graduated there with a degree in Marketing. Likewise, he played his collegiate golf there too.

Additionally, he also competed in the 2010 U.S. Amateur at Chambers Bay in University Place, Washington.

In 2012, Harold Varner III began his professional career. He participated in “Web.com Tour”, “eGolf Tour” and “Florida Tour” and also qualified for the 2013 U.S. Open.

He went on working hard and playing hard to make a name for himself in the world of Golf. Consequently, he won “The Australian PGA Championship” in December 2016.

It was his first professional golf title victory. Furthermore, in 2016, he also qualified for PGA Championship.

Varner won the PIF Saudi International on the Asian Tour in February 2022. He beat Bubba Watson by one stroke by eagling the 18th hole with a 92-foot putt.

Harold took his first single 54-hole PGA Tour lead at the RBC Heritage in April 2022. He came in third place, one stroke behind winner Jordan Spieth.

Further, he rose to 36th in the global rankings, a career-high.

As of 2022, he has an estimated net worth of $1.5 million. There is no information regarding his salary.

Seeing his performance in his field we can assume that he earns a good salary.

Harold is a golfer who likes to keep his all focus on touring and finishing top. This restricts him to make any statement or do anything that creates controversy in the media.

Presently, there are no rumors that surround his personal or professional life.

Harold Varner III has a height of 5 feet 8 inches. His body weighs 75kg.