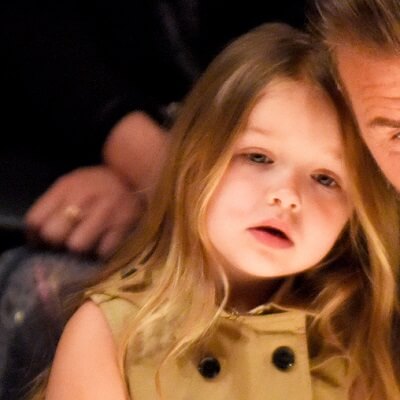 Harper recently celebrated her 10th birthday with her family. Being the youngest member of the Beckham family, she is adored by her parents and elder brothers.

As expected, Harper was showered in love, balloons, and even cupcakes with her face on them. However, that wasn’t all as her mom had prepared a very special cake for her lovely daughter, too. Victoria shared pictures of the cake in Instagram stories revealing the cake having a little girl tucked into double-tier cover in white icing. The delicious-looking dessert had two music notes and four edible figurines.

“Happy 9th Birthday Harper x We love you so much x.” was written across the bottom of the cake. All of her family members wished her a happy birthday with pictures on Instagram receiving hundreds of thousands of comments by well-wishers wishing the 9-year-old a happy birthday. Thus, it is safe to say that Harper had a blast on her birthday.

Who is Harper Beckham?

Harper Beckham is an English celebrity child. She is the daughter and the youngest child of the famous celebrity couple, David Beckham and Victoria Beckham.

Harper Beckham was born as Harper Seven Beckham on July 10, 2011, in Los Angeles, California, at the Cedar Sinai Hospital. As of 2022, her age is 11. She was born to parents David Beckham (father) and Victoria Beckham (mother).

Her mother, Victoria Beckham is an English fashion designer and former member of the girl band, ‘Spice Girls. She is popularly known as “Posh Spice”. Her father, David Beckham an English entrepreneur and former footballer who captained the English national team and played for several famous clubs including Manchester United, Real Madrid, AC Milan, etc. David Beckham is one of the most recognizable and famous footballers of all time and is considered a British cultural icon.

She has three elder brothers, Brooklyn Joseph Beckham (1999), Romeo James Beckham (2002), and Cruz David Beckham (2005). Harper attracted a lot of media attention at her birth and is probably one of the most recognizable nine-year-olds in the world.

Harper loves playing with her toys as well as drawing and coloring. Throughout the years, she has written several letters to her parents and also made handmade cards with cute messages and drawings making her parents feel loved and proud. She also loves playing with her brothers and is very close to Romeo. Harper loves her father and is seen spending time with him a lot. Her hobbies include swimming, singing, skiing, etc. She is spending her childhood days in the luxuries of her parents.

Her ethnicity is English and German.

Harper Beckham became a celebrity the day she was born. She has attracted a lot of media attention since her birth and she has been making headlines ever since she was born.

Her adorable looks have only added more to her popularity. She has a natural charm for the camera and her father has predicted her to have a massive career in modeling in the coming future.

After her birth, her mother was inspired to start a whole new line for little girls and she is the inspiration behind Victoria’s new line at ‘Target’. The collection is designed keeping in mind classic colors, yet also incorporating prints attracting the attention of children.

Moreover, Harper also has a collection of her own with designs from international brands including Karl Lagerfeld and Ralph Lauren.

Seven has been a vital part of Victoria’s fashion week shows. Moreover, her mother has trademarked her name and has the sole rights as a parent and guardian.

Harper Beckham stands at a height of around 3 feet 6 inches and weighs around 30 kg. She has blonde hair and a pair of brown eyes.

As of 2022, Harper is too young to have a net worth as she does not have a professional career just yet. However, she is expected to have a huge net worth once she grows up. Her parents have a combined astronomical net worth of over $900 million as of 2020 and are expected to keep rising making them one of the world’s ‘power couples’.

Harper has not been involved in any controversy or scandal and is too young for such stuff.

Seven is too young to be on any social media site but already has fan pages with over 100k followers.

You may also like to read more about the Bio, Career, Net Worth, Relationships, and more about Victoria Beckham, Brooklyn Beckham, Romeo Beckham, etc.