Harris Reed is openly gay. Reed come out as gay when she was nine years old. She hasn’t yet introduced anyone as her boyfriend or lover. As of now, she is single. 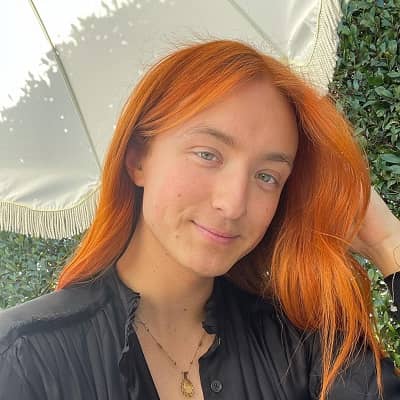 Who is Harris Reed?

Harris Reed is a British American fashion designer. Recently, Redd collaborate with fashion model Iman on the 2021 Met Gala. It is Reed’s first appearance on the Met Gala red carpet.

The custom is a jacquard gold bustier and flared trousers into an enormous crinoline skeleton bedecked with layers of feathers covered with gold leaf.

Harris was born on the 20th of May 1996 in California, United States. According to her birth date, she is 25 years old as of now. Her Sun sign is Taurus.

The name of Reed’s mother is Lynette Reed whereas she hasn’t yet disclosed her father’s identity in the media. Her father is a documentary filmmaker and her mother is a perfumer and former model by profession.

She has also a younger sister. Talking about her academics, she attended the art school Central Saint Martins in London, England.

Further, she holds dual citizenship of American and British. Her ethnicity is Caucasian.

At the age of 13, Harris interned with Kelly Cutrone, one of the biggest US fashion PR companies. She has designed some of Harry Style’s recent world tour outfits while she was still a student at Central Saint Martins in London. Harry wore Reed’s “glam rock Victorian prince” outfit at the Amsterdam stop on tour promoting his debut solo album, Harry Styles.

On July 21, 2020, she launched her e-store, and her collection, glamorous gender-fluid blouses went out of stock in a matter of hours. She has also associated with other stars including Harry Lambert, Sky Ferreira, Rowan Blanchard, and Alessandro Michele. Their work has appeared in articles for major fashion publications such as Vogue Italia, DAZED, and I-D. For her Met Gala 2021 design, she was inspired by ballroom culture in America’s golden age.

Apart from fashion, Reed was involved in several campaigns. She is well known for her relationship with Gucci. She featured in Gucci’s new Memoire d’une Odeur fragrance campaign.

Reed has avoided such controversial acts and rumors that create a huge buzz in the media. So, she has managed to maintain a clean profile to date.

Harris’s main source of income is her profession as a fashion designer. She has accumulated around $2 million to $4 million net worth as per other online sources. Her salary and other earning are still under review.

Talking about Reed’s physical appearance, She has well-maintained body physic with a towering height. She stands at the height of 6 feet 7 inches tall. Her weight is about 678 kg.

Likewise, she has green pair of eyes and blonde hair color.