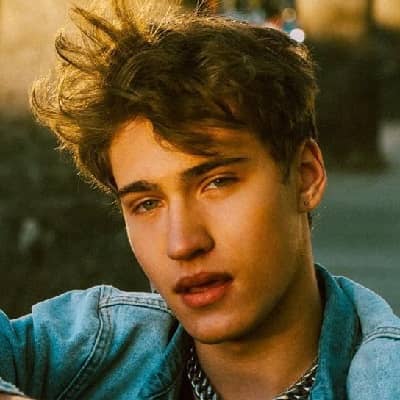 Harrison Cone currently appears to be single. He hasn’t introduced anyone as his girlfriend or lover.

Presently, he is focusing on his career rather than on a romantic relationship. In further fays, if he revealed anything about his love life then we will update it.

Who is Harrison Cone?

Harrison Cone is an American Instagram model, actor, and musician. He is also a Music Producer and Singer-Songwriter.

He is best known for his fashion and lifestyle pictures on his social media.

Harrison was born on December 27, 2002, in Englewood, Colorado. He is of American nationality and belongs to mixed descent of Latino, Hispanic, Caucasian, and European.

He hasn’t yet disclosed his parent’s detailed information. Similarly, he has an older brother but his name is also unknown.

There are no details available regarding his academic institution but he studied his acting classes at the Pace Center Acting and Theatre (2012-2016).

Harrison started his career as a theater artist. At the age of 12, he was cast as a young actor in the movie “the wizard of Oz” in the role of  Nikko. He has also appeared in the role of Baby John in the production of ‘West Side Story.’

Likely, he has also played the character of Robin Hood in the production of ‘The Heroic Robinhood‘ in the Mainstreet Center Theatre. In 2015, Cone appeared in the film title ‘A Pole and a Rock‘ portraying the role of Rick.

Lately, he starred in the Brat series, ‘Stage Fright’ alongside Sophie Michelle, Tahini Anderson, Sawyer Shaebino. He portrayed the role of Noah for the five episodes of the series.

Furthermore, some of his film are enlisted below,

Moving towards his musical career, he released several pop music singles such as ‘Wave’, ‘Blurry Vision’ in the year 2019. Similarly, he collaborates with different agency representation with Dream Talent Management and AEFH Talent Agency.

Besides, he has gathered a massive fan following over the years from his self-titled social media sites. He is also a social media influencer who rose to fame by sharing fashion and lifestyle photos on his Instagram handles.

As per other online sources, Harrison has an estimated net worth in the range of $1 million to $2 million. However, his exact salary, yearly income is still under review.

The actor has an athletic body type. He stands at the height of 6 feet and weighs is 67 kg. Likely, he has a brown hair color with green pair of eyes.

Furthermore, his other body statistics are still under review.

He has also a self-titled Youtube channel where he has only 2 videos. Despites of two videos, he has more than 1.1k subscribers on his youtube channel. His Snapchat username is @harrisoncone.

Bachelor in Paradise shoot halted amidst sexual misconduct controversy, what Olympios and Jackson have to say?-Learn on it here!