Actor Harrison Ford is married and a father of five. 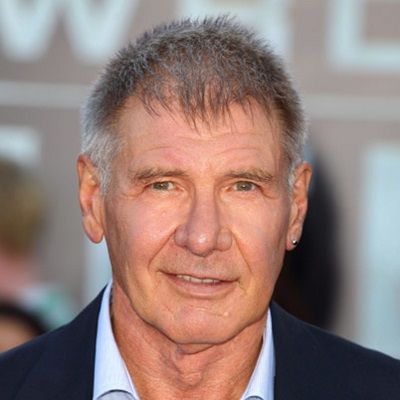 It's a little-known fact, but I wanted Han Solo to die at the end of Star Wars: Episode VI - Return of the Jedi (1983). I thought it would give more weight and resonance. But George Lucas wasn't sympathetic. He didn't want me killed by those teddy bear guys.

I'll make you a deal. I'll try to keep making films that put people in your theatre seats and you try to keep their shoes from sticking to the floor.

I used to shake my head, as in "No, I just look like him." But that's not fair. So I said to those little old ladies at Trenton Airport, "Yes, I am Harrison Ford." And they still didn't believe it was me.

Harrison Ford had a short and passionate affair with author Eve Babitz before making it big in Hollywood. He was already in a relationship with his first wife Mary Marquardt at that time. Ford started dating chef Mary Marquardt while studying at Ripon College.

They got married in 1964 and Mary accompanied Harrison when he moved to Los Angeles to try his luck at acting. Mary gave birth to their first son, Benjamin in 1967 and their second son, Willard in 1969. However, by the mid of the ’70s, their relationship had run into trouble and they decided to separate in 1977. Their divorce was finalized in 1979.

Moreover, Harrison dated actress Carrie Fisher and revealed that she had a passionate three-month-long affair with her Star Wars co-star, Harrison.

The affair happened during the shooting of the movie in London and started when Ford offered to drive her home after movie director George Lucas’s birthday party. She was very serious about him and tried hard to make him fall in love with her.

However, it never happened. Ford had a very brief affair with the stuntwoman, Heidi Von Beltz, in 1978. Harrison met screenwriter Melissa Mathison in 1976 but started dating some years later. Ford walked the aisle for the second time in March 1983.

Melissa gave birth to two children, son Malcolm (b. 1987) and daughter Georgia (b. 1990). Their marriage was considered as one of the most stable marriages in the industry. However, in October 2000, Ford moved out of their family apartment in Manhattan.

Apparently, Melissa was tired of his bad-boy bachelor’s behavior. After briefly celebrating his newly single life with visits to strip clubs and partying with a bevy of beauties, he asked for one more chance from Melissa, which despite her generosity didn’t amount to much as they finalized the divorce in 2004.

Ford met actress and singer Minnie Driver at Timothy White’s art show at a Los Angeles gallery in November 2001 and started dating. They split in early 2002.

After separating from Melissa, Harrison found love in actress Calista Flockhart. They first met at the Golden Globe Awards in January 2002. At the event, Calista intentionally spilled her drink on Ford so that she could get some more time with him.

That move worked wonderfully for her as after dating for around 7 years, they got engaged in 2009 on Valentine’s Day eve. They got married in June 2010 at a lavish ceremony at New Mexico Governor’s mansion in Santa Fe.

Who is Harrison Ford?

Harrison Ford is one of the most prolific American actors in Hollywood who came to prominence for his role in ‘Star Wars trilogy and ‘Indiana Jones.

Harrison Ford was born in Chicago, Illinois, the United States on July 13, 1942. He is 79 years old. His father’s name is Christopher Ford and his mother’s name is Dorothy Ford.

There is no much information about his father, mother, and childhood.

Talking about Harrison’s education history, he graduated from Maine East High School in Park Ridge, Illinois, and attended Ripon College in Wisconsin, where he was a member of the Sigma Nu fraternity.

Talking about his profession, in 1964, this actor traveled to Los Angeles to find job opportunities in radio voice-overs. Later two years, he also landed his first-bit role as a bellboy in ‘Dead Heat on a Merry-Go-Round’.

Whereas a result of offending producer Jerry Tokovsky, he found little luck in minor roles as well. Besides that, his first credited role was the 1967 Western film, A Time for Killing.

Whereas, some of the hits include Blade Runner, Witness, The Mosquito Coast, and Frantic. Moreover, the actor’s work during the late 90s and early 2000s are best forgotten. In the year 2010, he released Extraordinary Measures and worked on Morning Glory.

During 2011, he starred alongside Daniel Craig and Olivia Wilde in the wildly successful science-fiction Western Cowboys & Aliens. In the year 2013, he co-starred alongside Liam Hemsworth and Gary Oldman in the corporate espionage thriller Paranoia. He is also set to reprise the role of Han Solo in the upcoming Star Wars Episode VII.

He was nominated for the Academy Award for his 1985 role in Witness, the BAFTA, and the Golden Globe in the Best Actor category.

In the year 1997, Empire magazine ranked this actor No. 1 in its Top 100 Movie Stars of All Time list. In 2000, he received the AFI Lifetime Achievement Award.

He has an estimated net worth of around $300 million (as per 2021 data) and he has earned that sum of money from his professional career.

Harrison has been successful in keeping himself far from rumors and controversies in his personal and professional life.

Harrison Ford has a height of 6 feet 1 inch. Additionally, he weighs is 81Kg. In addition, his chest, waist, biceps sizes are 42-35-14 inches respectively.

Harrison’s hair color is Salt and Pepper and his eye color is hazel.