Harry is a married man as of now. He has been married thrice until now. Currently, he is married to actress, Lisa Rinna. They got married on March 29, 1997. The lovebirds are still living happily together. They have two children together named, Delilah and Amelia Hamlin. They were born in 1998 and 2001 respectively.

Before this marriage, he has been married twice and had a relationship with Ursula Andress. He has a son with the actress, Ursula, named, Dimitri Hamlin who was born in 1980. After that, he was married to Laura Johnson. The marriage ceremony happened in 1985 but they divorced in 1989. Later in 1991, he got married again with the actress, Nicollette Sheridan. It was his most short-lived marriage. They divorced in 1992. 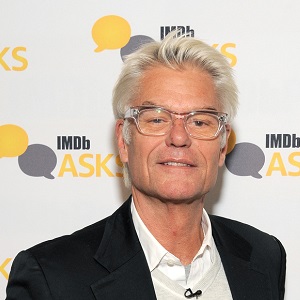 In those days I was mortified, because I was a serious actor in my own mind, and then all of a sudden I'm this hunk

I get to play a great character while working with great actors and great directors on a great show.

Who is Harry Hamlin?

California-born Harry Hamlin is a film and TV actor. He is famous for being selected as People Magazine’s “Sexiest Man Alive” in 1987.

Presently, he is a prominent figure in the media for his role in the fantasy film, “Clash of the Titans”. He portrayed the role of Perseus in the film. Additionally, he is also popular for starring in a TV series named, “L.A. Law”. He appeared on that show from 1986 to 1991.

Harry was born in Pasadena in the state of California. Born on October 30, 1951.  He possesses American nationality and his ethnicity is mixed (English, Scottish).

His birth name is Harry Robinson Hamlin. He was born to parents, Berniece Robinson(mother) and Chauncey Jerome Hamlin, Jr.(father) His mother was a socialite and his father was an aeronautical engineer. As a growing child, he loved to play soccer. Similarly, he was interested in acting from a young age too.

As part of his education, he attended Flintridge Preparatory School and The Hill School, a private boarding school in Pennsylvania. Afterward, he joined the University of California for his further education. Later, he joined Yale University. In 1974, he graduated from there with a Bachelor of Arts degree in drama and psychology.

Harry is a talented actor. He is active in the acting industry since 1976. In 1976, he appeared in the television production of “Taming of the Shrew”. Before that, he did a minor role in the film, “Hercules” in 1969.

As per his proper TV career, he made his debut in 1979 in a TV show, “Studs Lonigan”. Similarly, he went on working hard and appearing in different series. Consequently, in 1981, he joined the cast of fantasy film, “Clash of the Titans”. He played the role of Perseus. His performance in the film gained him popularity.

Afterward, Harry Hamlin has appeared in many films like “Blue Skies Again”, “Frogs and Snakes”, “Perfume”, and others. Similarly, Harry starred in TV series like “L.A. Law”, “Ink”, “Movie Stars”, “Veronica Mars”, “Shameless”, and others.

Harry Hamlin: Salary and Net Worth

Presently, he earns a huge amount of salary and has a net worth of $10 million.

Back in 2015, rumors accused him of cheating. It created a huge controversy in the media. Afterward, rumors started spreading that they are separating. Presently, there are no other rumors that surround his personal or professional life.

Moving towards Harry Hamlin’s body measurements he has a good height of 5 feet 11 inches 77kg. He has salt pepper hair color and his eye color is dark brown. His shoe size is 10(US).