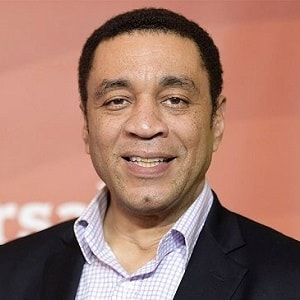 “I think that in some ways there is no more important thing in my life outside of family and God.”

Harry Lennix married to business executive and master degree holder, Djena Nichole Graves. The couple tied the knot on June 27, 2009. They do not have any children yet.

Information about his previous affair is not available and it is under review.

Who is Harry Lennix?

Harry Lennix is an American actor and he is best known for his role as Terrence “Dresser” Williams in the movie ‘The Five Heartbeats’ and for his role as Boyd Langton in ‘Dollhouse’. He is currently involved as Harold Cooper, Assistant Director of the FBI Counterterrorism Division in the drama ‘The Blacklist’.

His father was a mechanic and his mother was a laundry person. He was born and raised in a Christian family and he also follows Christian. He holds American Citizenship and his ethnicity is Afro-American and Louisiana Creole.

He joined the Quigley Preparatory Seminary South School and he graduated from there in 1982. Then he attended the North Western University and he completed 3 years course and majored in acting and directing.

He worked as a coordinator of the African-American student organization during his college year and at that time, he practiced music and he learned to play many instruments.

He performed in a couple of shows in Showtime Networks TV which includes ‘Faith’, ‘Baby’, etc. He appeared as a congressman in the movie ‘Titus’ based on William Shakespeare’s Titus Andronicus.

After his contract with ABC, he worked in their TV series Commander in Chief. In 2013, he played the role of an FBI officer Harold Cooper in the movie ‘The Blacklist’.

Harry performed comedy role of President Barack Obama in the comedy series ‘Little Britain USA’. He also made his appearance as Boyd Langton in the TV series ‘Dollhouse’.

He has been nominated for a 2004 Screen Actors Guild Award for Outstanding Performance by a Cast in a Motion Picture.

Harry Lennix: Net Worth and Salary

It is estimated that he has a net worth of around $4 million at present. He collected that decent amount from his acting career.

He is not much in disclosed about his personal life, and he has not been in any rumor and controversies till date.

He has an aesthetic and attainable body. He has a height of 6 ft. 4 inches and he weighs 73 kg. He has black hair and black eyes. Other information about his dress size and shoe size is not available.