Senior correspondent Hasan Minhaj is married to his longtime girlfriend.

Hasan Minhaj is a married man. He is married to his long-time girlfriend Beena Minhaj. After a long affair, the couple got married in 2015.

There is no record of their children till now. The couple has been married for two years now and their relationship is going very well. There are no other records of his past and present relationships. 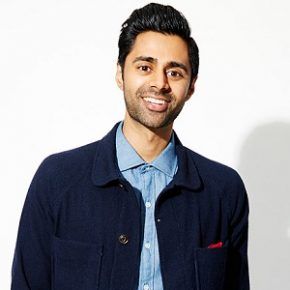 My dad's from that generation like a lot of immigrants where he feels like if you come to this country, you pay this thing like the American dream tax: like you're going to endure some racism, and if it doesn't cost you your life, well hey, you lucked out. Pay it

there you go, Uncle Sam. I was born here, so I actually had the audacity of equality

I'd rather be an angry optimist than an angry nihilist.

Who is Hasan Minhaj?

Hasan Minhaj is an American comedian and actor. He is best known as the current senior correspondent on Comedy Central’s The Daily Show.

He launched his acclaimed one-man stand-up comedy special, Homecoming King, which debuted on Netflix in May 2017.

Talking about his early life, Hasan Minhaj was born on 23 September 1985, in Davis, California, USA. He belongs to a Muslim family originally from Aligarh, Uttar Pradesh, India.

He is the son of Najme Minhaj and Seema  Minhaj. His father is a chemist and his mother is a doctor. His parents immigrated to Davis, California before his birth.

He has a sister named Ayesha Minhaj, an attorney. Minhaj is an American by nationality and belongs to the Indian ethnicity. He spent his childhood in California.

After that, he traveled to San Francisco to perform. His inspirations were Kevin Shea, W. Kamau Bell, and Arj Barker.

After moving to San Francisco to perform comedy, he acted in several comedy programs and shows. He rose to fame when he won Wild 94.9’s “Best Comic Standing” competition in 2009.

After that, he worked part-time at the Ning website as a writer. He then moved to Los Angeles in 2009 to perform on NBC’s Standup for Diversity. In the competition, he finished as a finalist.

After that, he became a series regular on the TV sitcom State of Georgia. He then starred in various roles on the MTV hidden camera show Disaster Date in 2011. In 2012, Minhaj appeared as a guest on the programs Arrested Development and Getting On.

He received his second Award Nomination in April 2019 for Patriot Act, and Time magazine named him one of the world’s 100 most influential people.

On November 13, 2020, it was revealed that Minhaj would play a recurring character in season 2 of the Apple TV+ program The Morning Show.

While hosting the 2017 White House Correspondents’ Association dinner, Hasan cracked a few jokes about President Trump. For his inappropriate jokes, many Trump supporters criticized him. There is no other controversy related to him.

Hasan Minhaj is a person with a height of 6 Feet and weighs 75 kg. He has black hair and eyes color.

Furthermore, there are no details regarding his body measurement.

Also get to know more about the birth facts, education, career, net worth, rumors, height, and social media of different personalities like Sarah Litzsinger, Kim Basinger, and Anthony Ramos.