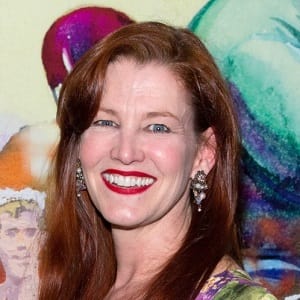 Haviland Morris is a married woman. She is married to Robert Score. The pair has a daughter together: Faith, who was born in 1991 and a son Henry who was born in 2000. Their marriage is going strong as there is no news regarding any extramarital affairs at present.

Who is Haviland Morris?

Haviland Morris is an American actress. People mostly know her for her appearances in movies and television series like ‘Quarry’, ‘Elementary’, ‘As the World Turns’, and ‘Law & Order: Criminal Intent’ among others.

Morris was born in Loch Arbour, New Jersey on September 14, 1959. Although born in New Jersey, she spent most of her childhood years in Hong Kong. Additionally, Morris became interested in the world of acting since her childhood years. She is of American nationality. Furthermore, there are no details available about her ethnic background at present.

Talking about her education, Morris attended Purchase College. There, she was a classmate of Stanley Tucci.

Morris initially appeared in the movie ‘Reckless’ as Mary Pat Sykes in 1984. In addition, in the same year, she also had a role in another movie ‘Sixteen Candles.’ She played Susan in the TV movie ‘Royal Match.’ She also had roles in ‘George Washington II: The Forging of a Nation’, ‘Family Ties’, and ‘Who’s That Girl.’ Since then, she has appeared in numerous other movies and television series. All in all, she has over 45 credits as an actress.

Morris has not revealed her current salary. Furthermore, there are no details available about her estimated net worth.

The movie that Morris appeared in: ‘Sixteen Candles’ was controversial and was termed racist and sexist. At present, there are no rumors concerning Morris and her career.

Talking about her body measurement, Morris has a height of 5 feet 7 inches (1.7 m). Additionally, her hair color is dark brown and her eye color is blue.