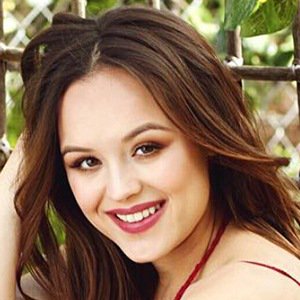 Sitcoms always made the most sense to me. I grew up watching them every day with my dad. Every Monday, Tuesday night, we would be sitting in front of the television watching any kind of sitcom. I connect with that more, but I love to do whatever kind of role. Read more at: https://www.brainyquote.com/quotes/hayley_orrantia_723410

Hayley Orrantia was in a romantic relationship with a guy whose name has not been revealed yet. She was planning to marry him but she found that he was fleecing her thousands of dollars from her. And they got separated.

Currently, she is dating her boyfriend Brandon according to some sources.

Who is Hayley Orrantia?

Hayley Orrantia is an American singer, actress, and songwriter. She is famous for her role on the ABC comedy series ‘The Goldbergs’ as Erica Goldberg. She was a part of Lakoda Rayne which is a country pop girl group assembled by Paula Abdul during the first season of ‘The X Factor’.

She was born on February 21, 1994, in Arlington, Texas, USA. Her birth name is Sarah Hayley Orrantia and she is currently 24 years old. Her mother’s name is Melody Orrantia and her father’s name is Daniel Orrantia. There is no information about her siblings. She holds American citizenship and her ethnicity is a mix of English, French, Irish, and Mexican.

She joined public school from elementary to middle school in her hometown of Highland Village and later attended Marcus High School in nearby Flower Mound until her junior year. Them she made her decision to become homeschooled to pursue her music and acting training. She joined the musical theatre program in high school and got her first taste of acting.

Her first commercials were at the age of 17 for ‘Sprint’ in 2011 and after that, she was cast in the independent film ‘Cooper and the Castle Hills Gang’.

She auditioned for the first season of ‘The X-Factor’ in the summer of 2011 and was selected from a YouTuibe video submission and received four ‘yes’ votes from the judges in the audition phase in Seattle, Washington. She along with other other three singers group was eliminated during the fifth week of the show ‘Hollywood Week’.

Hayley portrayed the role of Erica Goldberg on the ABC comedy series ‘The Goldbergs’ since 2013. She has sung in the several episodes for the series creator Adam F. Goldberg and she plans to bold her singing talent in future episodes.

She played the leading role in the drama film ‘God’s Not Dead 2’ which was released on April 1, 2016. The, she released her single ‘Strong, Sweet and Southern’ in 2016.

She is a strong supporter of the cancer charity, Longevity, Susan G. Komen, and Stand Up to Cancer. She has been serving as an ambassador for the Texas Music Project since 2007, which raises funds and awareness for music education in public schools.

She has written the song ‘Who I Am’ for the National Eating Disorders Association and ‘Powert of a Girl’ for the ‘Girl Scouts of America’.

She was nominated for Imagen Award for Best Supporting Actress/television for ‘The Goldbergs’ in 2014.

She has maintained her net worth of around $3 million from her professional career. Her salary is unknown.

Her ex-boyfriend Con defrauded thousands of dollars from her.

Another rumor heard was that Hayley is pregnant but neither her boyfriend Brandon nor she has confirmed.