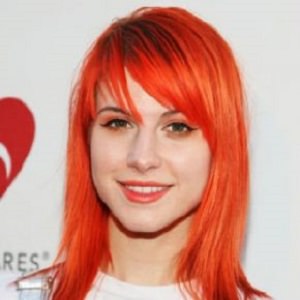 Sometimes it takes a good fall to really know where you stand.

If you ever think about giving up, remember why you held on for so long.

I’m in a band. I don’t go to church every Sunday. I love punk rock music. Sometimes I use swear words a lot. I respect and admire gay men and women. I’m obsessed with horror films. I know what shame feels like. And guess what old man? Jesus is still my Savior.

Hayley Williams has been in a few relationships in her life. She dated American musician Josh Farro from 2004 to 2007. After that, she began a relationship with New Found Glory’s lead guitarist Chad Gilbert in early 2008. The couple got engaged on December 31, 2014. They got married on February 20, 2016. The couple announced via Instagram that they have split up on July 1, 2017. Despite their separation, they have said that they will continue to be close friends. Their divorce is no finalized yet.

Who is Hayley Williams?

Hayley Williams is an American singer and songwriter. She is best known as the member of the rock band Paramore. With the band, she serves as the lead vocalist, primary songwriter, and occasional keyboardist. Her two albums with the band went Platinum. In 2009, Spin Magazines named her Readers Poll: ‘Sex Goddess Of The Year’.

Hayley Williams was born on 27 December 1988, in Meridian, Mississippi, USA. Her nationality is American and she is of English ethnicity.

Her full name is Hayley Nichole Williams. She is the daughter of Christie Williams and Joey Williams. She has two younger half-sisters named Erica and Mckayla. Her parents divorced when she was 13 years old. After that, she moved to Franklin, Tennessee.

Hayley went to high school and elementary school in Mississippi but the name of her school is not given.

Hayley was first discovered by Dave Steunebrink and Richard Williams in 2003. The managers immediately signed a two-year production deal with her. After that, she began working with Atlantic Records A&R. Shortly, she left the deal to be part of a band and play pop punk music. After that, she formed the rock band Paramore with Josh Farro, Zac Farro, and Jeremy Davis in 2004.

The band released their debut album, All We Know Is Falling in 2005. Their first and second album went Platinum. In 2014, she won the Trailblazer Award in the 2014 Billboard’s Women in Music Awards for making a unique mark in music. In 2015, she won the Grammy Award for Best Rock Song for her song “Ain’t It Fun“. After that, she won the APMA for Best Vocalist in July 2015.

Williams launched her online beauty and music series “Kiss-Off” on Popular TV in 2015. She released her fifth studio album After Laughter with Paramore.

She has a net worth of $14 million but her salary is not revealed yet.

Williams has a slim body with a height of 5 feet 2 inches and weighs 53 kg. She keeps dying her hair and her natural hair color is light brown whereas her eye color is green. Her body measurement is 34-25-34 inches and wears a bra size of 32B. She wears a dress size of 6(US) and shoe size of 5(US).

Also know more about the early life, career, net worth, relationships, and controversies of other singer and songwriter including Alexandra Lenas, Brandy Norwood, Lyrica Anderson, Ian Anderson, and Anderson East.