Hazel-E is a TV personality, publicist, brand consultant, entrepreneur, and also a rapper.

Hazel was in a relationship with the rapper, Rose Burgundy from 2016 to 2018. 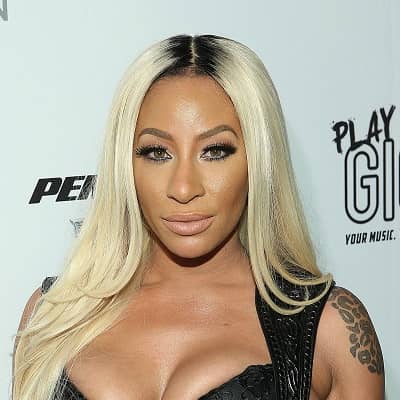 Hazel-E is a TV personality, publicist, brand consultant, entrepreneur, and also rapper. She is also a social media influencer now.

She has appeared in series like The Parkers,  Love & Hip Hop: Hollywood, and The Doctors. The artist is currently represented by Creative Artists Agency and Chris Giovanni at CGEM Talent.

Hazel was born on April 25, 1980, in Cincinnati, Ohio, USA. She grew up in Houston, Texas. Her birth name is Arica Tiffany Adams.

Growing in a family with a military background she has traveled a lot throughout her childhood and early teen years. Her mother’s name is Angela Cross-Nettles.

Hazel along with her mother appeared on an episode of Iyanla: Fix My Life in 2018. She reveals that she was molested by a female babysitter as a child in the show.

Hazel completed her primary education at a local high school. She graduated from the Southwest Texas State University.

Hazel began her music career at the age of seventeen. In 2008, she released ‘Shoe Fetish,’ which was her first mixtape. Likely, she released her mixtapes ‘Valley Girl,’  ‘The Diary of a Valley Girl’ and  ‘The Girl Code’ followingly every year.

The rapper released her single ‘Everything’ during the airing of the second season, and also promoted it during the show.  Furthermore, she get associated with KT Music Group and released two songs with them – ‘Na U Kno’ and ‘No Chill.’

Hazel is one of the show’s original eight cast members of the hit Vh1 TV series, Love & Hip Hop: Hollywood.  She has appeared in seasons one, two, and four and as a supporting cast member in season three.

Afterward, she starred in some renowned television series including “The Parkers”, and “The Doctors”.  She also appeared on season 17 of Marriage Boot Camp: Hip Hop Edition with her husband, De’Von Waller.

Hazel created her Youtube channel, Hazel-E Baby on 30, 2009. She doesn’t post her videos regularly but has already amassed 8.46 K subscribers as of now. She just started posting regularly from the past year. Her latest video was the Official Video of “Hazel-E – 400k BTS” posted on Mar 19, 2021.

Hazel also has a youtube channel along with her husband entitled “Hazel & Devon”. They launched the channel on Nov 26, 2019, and have over 12.5k subscribers now. The couple posts their musical videos, vlogs, and related videos on their channel. “Hazel E and De’Von Waller Gender Reveal Recap” is their most-watched video with over 129K views on the channel.

According to some sources, the cast member of Love & Hip Hop: Hollywood make  $200,000 per season. nd hazel also have receives a good earning bein its original cast members.

Hazel broke down into tears as share about her heartbreaking complications she experienced while getting a “Mommy Makeover.”

She also reports her recent postpartum surgery which has landed her in emergency surgery after a surgeon noticed complications with her previous augmentation.

Similarly, she has her own YouTube channel with 8.46K subscribers.

Kendra Wilkinson praises her estranged husband as he saves people and homes from the wild fires of California!