Heath Ledger was an Australian actor and director. People mostly recognize him for his role as Joker in ‘The Dark Knight’. 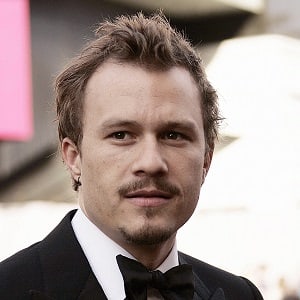 I never studied acting in Australia. I never had an empty stage and black pajamas to run around and express myself.

Brooklyn seems to me the closest thing in America to Europe. The neighbors and locals are beautiful people. It's like a village.

I start to get bored, not with the choices I was making, because I didn't really have a choice. The choices were being made for me -- I was being thrown into projects. So I kind of put the brakes on that. In a sense, I destroyed my career to rebuild it again.

Heath Ledger dated American Actress Lisa Zane from 1997 to 1998. From 2000 to 2002, he was in a relationship with the Australian Model Christina Cauchi. Heather Graham and Ledger dated from October 2000 to June 2001.

He was also linked with American Actress Michelle Williams. Together they had a daughter born in 2005. They named her Matilda.

Who was Heath Ledger?

Heath Ledger was an Australian actor and director. People mostly recognize him for his role as Joker in ‘The Dark Knight’.

Additionally, he also appeared in movies including ‘10 Things I Hate About You’, ‘Monster’s Ball’, ‘Brokeback Mountain’, and ‘The Imaginarium of Doctor Parnassus’.

He passed away on January 22, 2008, due to a cardiac arrest brought on by prescription drug intoxication.

Ledger was born in Perth, Australia on April 4, 1979, to parents Sally Ledger and Kim Ledger. He was interested in the world of show business since his childhood years.

He was of Australian nationality. Furthermore, he belonged to a mixed ethnic background of English, Irish, Scottish, Welsh, and Jewish [Ashkenazi and Sephardi].

Talking about his education, Ledger was enrolled at Mary’s Mount Primary School in Gooseberry Hill. In addition, he also attended Guildford Grammar School.

Heath Ledger initially left school to pursue an acting career. He first had a minor role in the 1992’s ‘Clowning Around’. Additionally, he also appeared as a cyclist in the TV series ‘Ship to Shore’. In 1996, he played the role of Snowy Bowles in the TV series ‘Sweat’. He also had roles in ‘Blackrock’, ‘Home and Away’, ‘Paws’, and ‘Roar’ in 1997.

In 1999, he played the role of Patrick Verona in the movie ‘10 Things I Hate About You’. Since then, he appeared in numerous other movies and television series. All in all, he had 23 credits as an actor.

Some other movies and television series that Ledger appeared in are ‘The Imaginarium of Doctor Parnassus’, ‘I’m Not There.’, ‘Candy’, ‘Casanova’, ‘The Brothers Grimm’, ‘Lords of Dogtown’, ‘The Order’, ‘Ned Kelly’, ‘The Four Feathers’, ‘A Knight’s Tale’, ‘The Patriot’, and ‘Two Hands’.

Additionally, he also had 3 credits as a director. Ledger’s portrayal of Joker in ‘The Dark Knight’ is hailed as one of the best performances by an actor in a movie.

Ledger won the Academy Award for his role as an iconic ‘Joker’ in ‘The Dark Knight’ in 2009. Additionally, he also garnered the Oscar nomination in 2006 for his performance in ‘Brokeback Mountain’. All in all, he has 77 wins and 55 nominations to his name to date.

Ledger was part of several press controversies when he was alive. Additionally, after his death, there were also several controversies over his will.

Talking about his body measurement, Heath Ledger had a height of 6 feet 1 inch (1.85 m). Additionally, his hair color was blonde and his eye color was hazel.