Heath Slater is an American professional wrestler and actor. He is married and a father of two.

Heath Slater is a married man. He is married to Stephanie Miller. The couple got married in 2011. They have two children together.

The names of their children have not been disclosed yet. The couple has been married for seven years now and their relationship is going very well. He currently resides in Fort Mill, South Carolina with his wife and children. 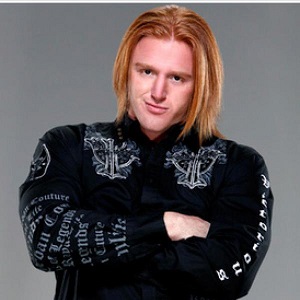 Who is Heath Slater?

Heath Slater is an American professional wrestler and actor. He is currently signed to WWE where he performs on the Raw brand under the ring name Heath Slater.

He appeared in the 2017 American action film The Marine 5: Battleground.

Heath Slater was born on 15 July 1983, in Pineville, West Virginia, USA. He is an only child and was raised by his mother, stepfather, and grandparents.

Talking about his educational background, he attended West Virginia University. He usually doesn’t talk about his private life in media and in public.

He prefers people to focus on his work rather than his personal life.

His nationality is American and he is of North American ethnicity. Miller was initially trained at WWA4 Wrestling School and began to wrestle in WWA4 events, and also in numerous Georgia-based wrestling federations.

Heath began his wrestling career while he was at WWA4 Wrestling School. In December 2006, he signed a developmental contract with World Wrestling Entertainment.

Shortly after the signing, he was assigned to Deep South Wrestling (DSW), a WWE developmental territory.

When the WWE ended its relationship with DSW in the spring of 2007, Miller was sent for further training at the new Florida Championship Wrestling (FCW) territory.

At a June 2007 FCW show, Miller appeared as the manager of fellow developmental talent Shawn McGrath under the name Heath Wallace Miller Esq. In 2007, he was given a talk show called The Happy Hour during some FCW shows.

Heath is a three-time WWE Tag Team Champion. He was one of the main cast members of The JBL and Renee Show from 2013 to 2015 on WWE.com. He consistently appears on Xavier Woods’ YouTube channel UpUpDownDown.

In 2017, he had a role in the film The Marine 5: Battleground. His salary is unknown.

Heath has a height of ‎6 feet 2 inches and weighs 98 kg. His body measurements are unknown.

However, his hair color is red and his eye color is brown. His shoe size is unknown.

Also get to know more about the birth facts, education, career, net worth, rumors, height, and social media of different personalities like Randy Couture, Kim Marie Kessler, and Curtis Axel.