Heather Dubrow is a married woman. She is married to a plastic surgeon, Terry Dubrow.

The lovebirds had their first encounter on a blind date. They tied the knot on June 5, 1999. The couple is still together living happily and creating an incredible bonding between each other.

They have four children together. She gave birth to twins, Nicholas and Maximillia in 2004. Afterward, in 2007 and 2010, she welcomed her two daughters Katarina and Collette respectively. 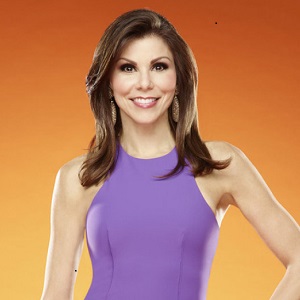 Truth is stranger than fiction, which is why reality TV is so popular.

It's very easy to listen to one comment and make a snap judgment.

I have to say, I'm sort of always obsessed with Norah Jones. I just love her voice, but I don't really have an album - I have a playlist.

Who is Heather Dubrow?

Heather Dubrow is a TV actress and TV personality. Heather Dubrow possesses American nationality and is a professional film actress.  She starred in TV series, “Stark Raving Mad” from 1999 to 2000. She portrayed the character of ‘Margaret “Maddie” Keller’ for 22 episodes.

Presently, she is a prominent figure in the media because of her appearance in “The Real Housewives of Orange County”.

Heather was born in the city of the Bronx in the state of New York on January 5, 1969. Her ancestors are from Austria, Poland, and Hungary, which makes her ethnicity of mixed descent.

Her birth name is Heather Paige Kent. Her father’s name is Conrad S. Kent and the mother’s name is unknown. Although she was born in the Bronx, she grew up in the town of Chappaqua, which is in New Castle, New York.

Furthermore, she has a mixed ethnicity of Austrian, Polish, and Hungarian. She has a sister named Schuyler Kent.

As per her education or academic achievement, she joined Syracuse University. Afterward, in 1990, she graduated from there with a degree in “Bachelor of Fine Arts”.

Heather Dubrow initiated her acting career since her 20’s. She has also tried her career in modeling. In 1989, she won the title of “Miss Congeniality” at Miss New York State Pageant. Although she graduated from college with a major in musical theater, she moved towards acting and never looked back. As per her acting career, she made her screen debut in an episode of a TV series, “Married… with Children”.

She played a minor role as a character, ‘Cherise’ in that episode. The same year she also starred in a TV movie, “Roseanne and Tom: Behind the Scenes”. She went on working hard and looking for major roles. Consequently, she got her to break in 1999 when she joined the cast of an American sitcom, “Stark Raving Mad”. She played the character of ‘Margaret “Maddie” Keller’ in that Series from 1999 to 2000.

Furthermore, she starred in TV series like, “Jenny”, “Surviving Suburbia”, and so on. Afterward, in 2012, she became incredibly famous after joining the cast of “The Real Housewives of Orange County”. She appeared on that show from 2012 to 2016.

She also starred in other projects like, “Now You Know”, “That’s Life”, “Hot in Cleveland”, and others.

Heather earns a massive amount of salary from her on-screen appearance on TV series. As of 2022, her net worth is estimated at around $50 million.

Heather and her husband were part of the controversy in 2016 when the emails threatening their ex-accountant got leaked. Presently, there are no rumors that surround her personal and professional life.

Heather Dubrow has a good height of 5 feet 8 inches with a bodyweight of 59kg. She has brown hair color and her eye color is dark brown. Her shoe size and dress size are unknown.