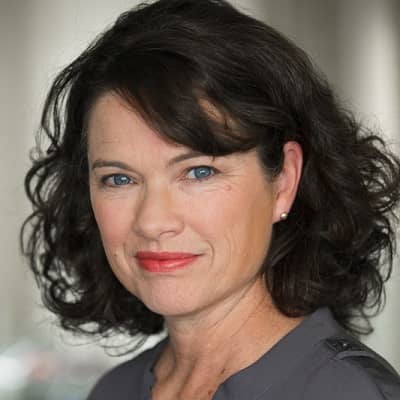 Heather Langenkamp is living a blissful conjugal life. She is married to David LeRoy Anderson. David is an Oscar-winning makeup artist. The couple first met at a wrap party for Wes Craven’s The Serpent and the Rainbow.

On 24 March 1990, they tied the knot, and together they have also two children. On May 24, 1991, Heather gave birth to their first child a son named Daniel “Atticus” Anderson. However, her son, Daniel passed away on January 10, 2018, due to glioblastoma multiforme (GBM) brain cancer for which he was battling for six years.

Langenkamp was previously married to musician Alan Pasqua on March 16, 1985. Sadly, their marriage didn’t long last, and got separated in 1987. She doesn’t have any children from her relationship with Pasqua.

Who is Heather Langenkamp?

Heather Langenkamp is an actress, producer, and prosthetic makeup coordinator from the united states. She is best known for her prominent role as Nancy Thompson in Wes Craven’s A Nightmare on Elm Street.

Presently, he is filming Mike Flanagan’s film The Midnight Club which is set to be released in the year 2022.

Emily was born on July 17, 1964, in Tulsa, Oklahoma, the U.S. Her full name is Heather Elizabeth Langenkamp. The name of her parents is Robert Dobie Langenkamp (father) and Mary Alice (mother).

Her father was the Deputy Assistant Secretary of Energy in the Carter Administration. As of now, he is a petroleum attorney. Similarly, her mother is an artist. She has three siblings named Matthew Langenkamp, Lucy Langenkamp, and Daniel Langenkamp.

Her nationality is American and belongs to mixed (German, Scottish, English, and Irish) ethnicity.

Talking about her academics background, she attended the National Cathedral School for Girls and graduated in 1982. Then, she joined Stanford University where she earned a degree in English Literature.

Prior to acting, Heather worked for Tulsa Tribune. In 1983, she gave auditions for Francis Ford Coppola’s The Outsiders where she was cast as an extra but her scenes were deleted from the final cut of the film.

Similarly, her scenes from the film Rumble Fish were also deleted. In 1984, she audition for Drew Denbaum’s Nickel Mountain, an adaptation of John Gardner’s 1973 novel where she got the lead role of Callie Wells.

The same year she appeared in the CBS television film Passions alongside Joanne Woodward and Richard Crenna. In the winter of 1983, she auditioned for a horror film, A Nightmare on Elm Street where casting director Annette Benson and director Wes Craven were impressed with her reading and got a role as Nancy.

She again reprises her role as Nancy in the sequel A Nightmare on Elm Strret3: Dream Warriors. Through the film, she got international prominence, and eventually, she became known for her role as the moralistic Marie Lubbock on the ABC television series Just the Ten of Us.

Following this, Heather has appeared in numerous notable film and television series such as,

Heather has accumulated a decent amount of wealth throughout her acting career. She has an estimated net worth of around $1.5 million as of 2021. Further, her salary, assets, and other income are under review.

The actress stands at the height of 5 feet 3 inches tall and her weight is about 54 kg. Her breast, waist, and hips sizes are 34, 25, and 35 inches. Her bra cup size is 38B (US). Likewise, she has dark brown hair color and grey pair of eyes.