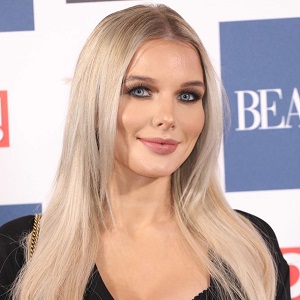 Helen Flanagan is in a relationship with a professional English football player, Scott Andrew Sinclair. He plays for Aston Villa as an attacking winger. The couple is planning to get married soon. They welcomed their first child, Matilda Jessica Sinclair on June 29, 2015, and second daughter Delilah Ruby Sinclar on June 22, 2018. Both of the daughters were born naturally.

Previously, she was in a relationship with Daniel Scott but the reason behind their separation is unknown.

Who is Helen Flanagan?

Helen Flanagan is a talented English soap actress, model, and television personality. She is famous for her role of Rosie Webster in the ITV soap opera ‘Coronation Street’ from 2000 to 2012. She reprised the same role in 2017 but went off on maternity leave On June 8, 2018.

She has a tattoo of Marilyn Monroe’s face on her left forearm. She is afraid of heights and dark. She is given a nickname as Helz.

Helen holds British citizenship but her ethnicity is unknown.

She decided to leave ‘Coronation Street’ in February 2012 to pursue her other interests and she made her participation in the twelfth series ‘I’m a Celebrity… Get Me Out of Here!’ in November 2012. She completed the series being seventh among 12 celebrities who appeared.

She made her appearance in ‘Celebrity Super Spa’ in September 2013, which was a reality television program based in a Liverpool Salon on Channel 5. Also, in the same year, she appeared in the music video of the song ‘Gorgeous Baby’.

It was announced in October 2016 that she would reprise her role as Rosie in ‘Coronation Street’ in February 2017.

She has been nominated for the British Soap Award in the category Best Dramatic Performance from a Young Actor or Actress for ‘Coronation Street’ in 2006.

She has an estimated net worth of around $3 million and her main source of income is from her professional career.

There was a rumor that she has been engaged to her partner, Scott Andrew Sinclair but she has denied the rumor.