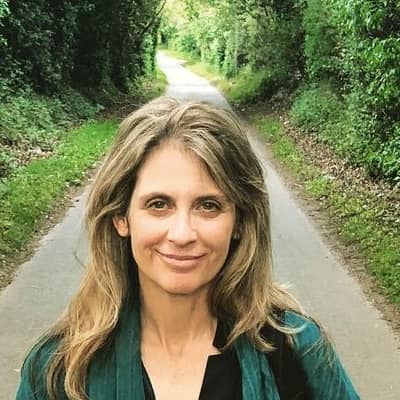 Helen Slater is happily married to theatre actor Robert Coit Watzke. Robert is also an acclaimed editor, director, and acting coach. The couple tied the knot on September 17, 1989, after dating for a year.

Who is Helen Slater?

Helen Slater is an actress, singer, and songwriter from the united states. She rose to fame after appearing in the title role in the 1984 film Supergirl. Slater is also best known for her role as Bonnie Rayburn in the 1991 comedy City Slickers.

Helen was born to Alice Joan and Gerald Slater on December 15, 1963. She hails from Bethpage, New York, U.S. Her full name is Helen Rachel Slater.

Her father is a television executive whereas her mother is a lawyer and nuclear disarmament. In 1974, her parents got divorced. She has also an older brother named David Slater who is a lawyer in New York City. The name of her sister-in-law is Patricia Slater.

Her nationality is American and belongs to Jewish ancestry.

Slater went to Great Neck Southe High School and later transferred to the High School of Performing Arts and graduated in 1982. In 2018, she earned a college degree from Antioch University in Culver City, California.

Helen landed her first acting role in an episode of ABC Afterschool Special as Amy Watson. She auditioned for the movie Supergirl in October 1982 and got the lead role by December. During the time, her body weight was 52 kg and she gained 9 kg of muscle in 4 months for the film.

A year after, she appeared in another film called The Legend of Billie Jean as Billie Jean Davy alongside Keith Gordin, Christian Slater, and Richard Bradford. She guest-starred in an episode “The Good Samaritan” of Seinfeld where she portrayed the role of Becky Gelke. From 2011 to 2013, she portrayed the role of Kristin Mercer on the ABC Family series The Lying Game. She provided her voice for animated series like Batman: The Animated Series (1992-1994) and DC Super Hero Girls: Super Hero High (2016).

Further, she has also played in two off-Broadway plays “Almost Romance” and “Responsible Parties”. She is the writer of a Supergirl story titled “A Hero’s Journey” which appeared in the fiftieth issue of the fifth volume of the Supergirl comic book.

Helen is a classically trained singer and released her first CD titled One of These Days in 2003. Similarly, her second CD, Crossword, which used the same recording approach as the first CD was released in 2005. Both of her albums were produced by Phillip Swann.

Helen has been nominated as the Best Actress in the Academy of Science Fiction, Fantasy & Horror Films, the USA in 1985. The same year, DC Comics named Slater as one of the honorees in the company’s 50th-anniversary publication Fifty Who Made DC Great for her work on the Supergirl.

Heather has accumulated a decent amount of wealth throughout her acting and music career. She has an estimated net worth of around $3 million as of 2021.

The 57 years old actress has a well-maintained body posture. She is 5 feet 8 inches tall and her weight is about 61 kg. Slater has light brown hair color and she often tends to dye her hair. Likely, she has blue pair of eyes.