Helga Lovekaty is a model, actress, and Instagram star who is with Philip Plein as its brand ambassador.

Helga seems to be single as of now. She hasn’t seen engaged with any boys on a romantic level currently.

Previously, she was in a relationship with professional Colombian footballer James Rodriguez. They started dating in 2017. James was married to his wife Daniela Opsina at that time. And there were various rumors that James was having affair with Helga and it led to the separation with Daniela.

However, Helga and James also get separated afterward. 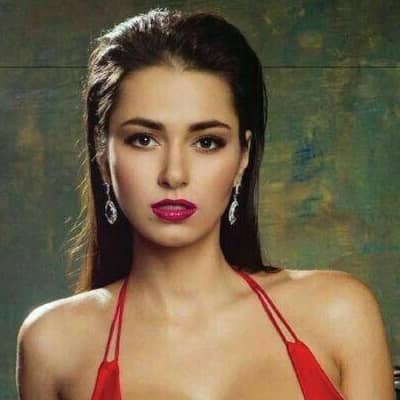 Helga Lovekaty is a Russian model, actress, and Instagram star. She has worked for various renowned brands and is the brand ambassador of Philip Plein.

Helga was born on April 7, 1992, in Saint Petersburg, Russia. She grew up in Khabarovsk city. Her birth name is Olga Korobitsyna.

She hasn’t shared any information about her parents. She has a younger sister Daria Lovekaty.

Likely, she hasn’t disclosed any details regarding her educational background. The model holds Russian nationality and has English and Russian descent.

Helga is a professional model and has been working for various modeling agencies. The model started her modeling career in 2013. She gains popularity after she met a Russian Entrepreneur, Pavel Durov.

Meeting Pavel and attending various parties with him she gets to know about various model agencies. No sooner she partnered with them and started working for various renowned brands. She has signed for Marvin Model and other magazines.

Talking about her acting career, she debuted with the role of “Hardcore Henry,” an angry prostitute in the 2015 movie Hardcore Henry.

Moreover, Helga also came into the limelight more after her relationship with Columbian footballer James Rodriguez. She often arrives at FIFA World Cup 2018 to support Russia and James in World Cup matches.

Helga has amassed a net worth of around $500,000 as of 2021. A fashion model in Russia receives a salary of around 91,400 RUB monthly. Helga also received a good earning from her modeling career.

Her ex-boyfriend James Rodriguez’s net worth is around $100 million.

Helga was once blamed to be the reason for James Rodriguez and his ex-wife Daniela Ospina’s separation.

Likely, it is also said that Cristiano Ronaldo met James to Helga. Yet the exact information is not known as they haven’t talked about anything officially.

Moreover, she once receives various bad comments and was part of the trolls for a pic she posted on her account. She has dressed in a tight purple dress and with knee-high boots captioning “get ready for the weekend”.

The model has naturally dark brown hair and dyes it blonde and other shades per her look. LIkely, she has beautiful dark brown eyes.

Her official Tik Tok account also holds 330K followers with more than 1.2M likes. Similarly, she launched her own YouTube channel on Sep 7, 2015, and has around 6K subscribers as of June 2021.