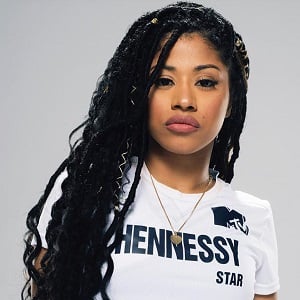 Fashion was always in me! The incentive to just get up and start my day by looking for an outfit to walk outside and look good, it was always in me. I think my parents and my family, my sister - when I was young, they always cared about, you know, looking good. My parents, they know how to dress

Before I scrub and exfoliate, I like to cleanse my face with the Tatcha cleansing oil.

What is the relationship of Hennessy Carolina?

Hennessy Carolina is openly a lesbian. She is currently in a relationship with her longtime partner, Michelle Diaz. The pair have been together for a long time.

Who is Hennessy Carolina?

Hennessy Carolina is an American social media star and television personality. People mostly know her as the younger sister of rapper Cardi B.

She appeared in the reality television series ‘Love & Hip Hop: New York. Alongside her sister.

Carolina was born in New York City, New York as Hennessy Carolina Almánzar on December 22, 1995. Throughout her childhood years, she was raised in the Bronx.

Additionally, she has an older sister American rapper, songwriter, and television personality, Belcalis Marlenis Almánzar, who is commonly known as Cardi B.

She is of American nationality. Furthermore, she belongs to a mixed ethnic background of the Dominican Republic and Trinidadian.

Hennessey competed in another TV series ‘The Challenge: Champs vs. Stars’ in 2018. Apart from her work on television, Carolina has also been prioritizing her budding fashion design career.

Carolina has not revealed her current salary. In addition, she has an estimated net worth of $4-5 million as of 2022.

Carolina has become part of several feuds over the years. She made the news recently after she made an inappropriate comment regarding musician Nicki Minaj.

At present, there are no rumors concerning Carolina and her career.

Furthermore, her hair color and eye color is black.