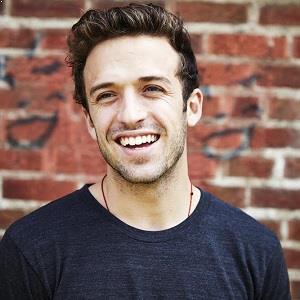 Henri Esteve is an unmarried man till now. In the early 2010s, he began dating American actress Gina Rodriguez.

After a few years of their affair, the couple got engaged in 2015. They separated later that year. Since then, he has not been in any relationships till now.

He is single at the present time.

Who is Henri Esteve?

Henri Esteve is an American actor and writer. He is known for his role as Javier Salgado on the ABC series Revenge (2014).

He played the character Javier in the series in seven episodes. Esteve also had a role in the 2016 American biopic disaster film, Deepwater Horizon.

Talking about his early life, Henri Esteve was born on May 6, 1989, in Miami, Florida, USA. There is no information about his parents. He has an older brother named Franz Klainsek, an artist.

Henri is an American by nationality but his ethnicity is unknown. He became interested in acting in his childhood age. At the age of 17, he moved to New York City to pursue his career in acting.

Henri completed his education in his native place. After that, he attended a two-year conservatory program at the Lee Strasberg Theatre and Film Institute.

Henri began his career as a theater actor in 2014. He made his acting debut playing Romeo in Romeo and Juliet at La Mama E.T.C. After that, he did multiple plays around Manhattan.

In 2014, he appeared in hit plays such as Does a Tiger Wear a Necktie and Homefront. Henri made his TV acting debut in 2014 on the hit ABC series Revenge. In the series, he played the character, Javier Salgado.

After that, he appeared alongside AJ Buckley and Doris Roberts in the independent film Microwave (2014).

Henri began writing and developing a One Man Show called Patsy in 2015. The show was about the life and death of Lee Harvey Oswald. After that, he appeared in the Peter Berg-directed drama Deepwater Horizon in 2016.

The following year, he had a role as Alex in the feature film Blackout (2017). His salary and net worth are unknown.

He has not been in any controversy till now. He has a well-profiled character.

He has green eyes and Light Brown hair.

Henri Esteve is not much active on social media. Currently, he is active only on Twitter.