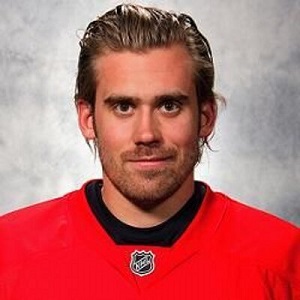 I don't think the summer is short. I would rather play hockey than work out in the gym. It would be tougher if summer was longer. You have your two or three weeks to take off. You have plenty of time to go back and see family and friends. I don't want summer to be any longer

When I was first drafted, I was just happy that any team wanted to take me, but it was the Red Wings, and that made it better

When you win, shoot-outs are a lot of fun. They're not as fun when you lose.

Henrik is a one-woman man. As of now, he is a married to Emma Andersson. She is a Swedish model and a TV host. The couple got engaged in the summer of 2008. After two years of spending time together as fiancées, they got married. The marriage ceremony happened on 23 July 2010. The marital ceremony took place in Mölle, Sweden. The lovebirds are living happily with each other. They have a son together named, Love. Love was born on August 20, 2015.

Who is Henrik Zetterberg?

Sweden-born Henrik Zetterberg is a professional ice hockey player. Currently, he plays in the forward position. He played for the team, Timrå Red Eagles in the past. He started playing professionally since 1997.

Presently, he is a prominent figure among the fans playing for the Detroit Red Wings of the National Hockey League (NHL). He is the captain there. Additionally, he played for his national team from 1998 to 2014.

Henrik was born in the city of Njurunda in Sweden. Born on October 9, 1980. He possesses Swedish nationality and ethnicity is European.

His father’s name is Ulla Zetterberg and mother’s name is Goran Zetterberg. He was interested in Ice Hockey from a young age. Since his early time, he grew passion towards this sport. This later defined his career. Other than that, there is no information regarding his early life or childhood.

Presently, he is playing for the Detroit Red Wings of the National Hockey League (NHL). Also, he played for his national team from 1998 to 2014. As his national side career, he finished first in 2006 Ice Hockey World Championships. Additionally, he won gold in the 2006 Winter Olympics. He has won several awards like “All-Star Game”, “All Time Rookie”, and so on.

Henrik focuses on his career. Being an athlete, he is going to get criticized for even one bad game. But apart from that, he is not part of any other criticism. Presently, there are no rumors that surround his personal or professional life.


Henrik Zetterberg has a height of 5 feet 11 inches. His body weighs 88kg. He has brown hair and brown eyes.