Henry Winkler is one inspiring actor who suffered from dyslexia and recovered at the age of 35. 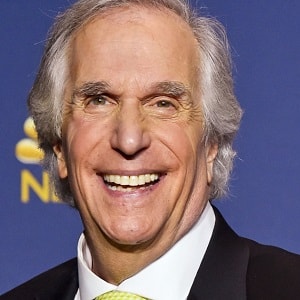 “I started my career in kindergarten playing a tube of tooth paste in a play about hygiene.”

Henry Winkler is married to Stacey Weitzman on May 5, 1978. They welcomed their first child Zoe Emily(pre-school teacher) in 1980 and welcomed their second child Max Daniel(director) on August 18, 1983.

He also has got a stepson named Jed Weitzman from Stacey’s previous marriage with Howard Weitzman.

Who is Henry Winkler?

Henry Winkler is an actor, author, director, comedian, and producer from America. He is famous for his role of greaser Arthur ‘Fonzie’ Fonzarelli in the 1970’s American sitcom ‘Happy Days’. He is also recognized as Sy Mittleman in ‘Children’s Hospital’ and as Eddie R. Lawson in ‘Royal Pains’.

He is the winner of two Golden Globe Awards and nominated three times for the Primetime Emmy Award for Outstanding Lead Actor in a Comedy Series for his role on ‘Happy Days’.

His parents were shifted to the U.S. from Berlin in 1939 on the eve of World War II. They told me that they were for a six-month business trip but they already knew that they were never going back to Berlin. He has got a sister named Beatrice. He holds American citizenship and his ethnicity is Ashkenazi Jewish.

Due to his undiagnosed dyslexia, he was very anxious and he was considered to be slow, stupid, and not living up to his potential. His dyslexia was treated at the age of 35.

He achieved his BA from Emerson College in 1967 and earned an MFA from the Yale School of Drama. He studied in Lausanne, Switzerland. During his high school and college years, he worked in a lumber mill in a small German town. He wanted to be an actor since his early age.

He started his first job in television as an extra on a game show in which he was paid $10. Later, he returned to New York City and appeared in television commercials and supported himself with the commercials work so he could do theatre for free at Manhatten Theatre Club.

He was cast in ‘Happy Days’ in January 1974 in the role of Arthur Herbert Fonzarelli and nicknamed The Fonz or Fonzie. His role remained very much a rough-hewn outsider and gradually became the focus of the show as time passed.

He collaborated with John Rich and established Winkler-Rich Productions and appeared on several television shows like ‘MacGyver’, ‘So  Weird’, ‘Mr. Sunshine’, etc. He directed ‘Memories Of Me’ in 1988 and ‘Cop and a Half’ in 1993.

He returned to acting at the beginning of 1990 and starred in the controversial made-for-television film ‘Absolute Strangers’ in which a husband forced to make a decision regarding his comatose wife and unborn baby.

Henry appeared as a recurring role in the Fox Television comedy ‘Arrested Development’ and later moved to CBS for one season in ‘Out of Practice’ and made guest appearances on television series such as ‘Numb3rs’, ‘The Bob Newhart Show’, ‘The Drew Carey Show’, ‘The Simpsons’, ‘Crossing Jordan’, ‘King of the Hill’.

He appeared as a retired cop in the Hallmark Channel movie ‘The Most Wonderful Time of the Year’. He also gave his voice to Willard Deutschebog, a suicidal German teacher, in the comedy series ‘Sit Down, Shut Up’.

He made his recurring role on USA Network’s ‘Royal Pains’ and later joined the web series ‘Children’s Hospital’ and appeared in 9 episodes of ‘Parks and Recreation; between 2013 and 2015 as Dr. Saperstein.

Henry starred and executive produced the NBC series ‘Better Late Than Never’ from the beginning of summer of 2016 and appeared in the role of acting coach Gene Cousineau in the HBO comedy ‘Barry’ at the beginning of 2018.

He along with his classmate opened a summer stock theatre and named New Haven Free Theatre and included ‘Woyzeck’ play. He was offered to take part in the film ‘The Great Northfield Minnesota Raid’ by Cliff Robertson. But he denied the role and stayed with the Yale Repertory Theatre for a year and a half.

Henry made his first pantomime at the New Wimbledon Theatre, London in 2006 and later reprised the role in ‘Working’ for Christmas 2007. He reprised the role of Captain Hook in Peter Pan at the Richmond Theatre in South West London in December 2013.

Alan Berger suggested Henry to write a children’s book about dyslexia in 1998 and he did not think he would be able to write as he is struggling with a learning disability. Berger again suggested and Winkler agreed and he has written 19 books since then. His book ‘I’ve Never Met an Idiot on the River’ was published on May 31, 2011.

He was awarded Golden Globe Awards for Best Actor in Television Series Musical or Comedy for ‘Happy Days’ in 1977 and 1978. He won the Critic’s Choice Television Award for Best Supporting Actor in a Comedy Series in ‘Barry’ in 2019. Henry was also awarded Daytime Emmy Award for Outstanding Performer in an Animated Program for ‘Clifford’s Puppy Days.

It is estimated that he has a net worth of around $40 million and his main source of income is from his professional career. He has worked in several TV shows plus movies which has helped him to gain popularity and money.

Winkler did not seem to break even a tiny sweat as he hopped around in his dark suit and dress shoes. Also, he could not even ride a bike because his coordination was so poor which was one of the symptoms of dyslexia. For action scenes, he just mounted on a piece of wood on wheels and pulled along.

Henry Winkler has a height of 5 ft. 6 inches and weighs 56 kg. He has got salt and pepper hair and green eyes.